The need for precautions to avoid accidentally administering vincristine intrathecally was emphasized in a recent report by oncology pharmacist Peter J. Gilbar of Cancer Care Services, Toowoomba Hospital, in Toowoomba, Queensland, Australia. The editorial was published in the Journal of Oncology Pharmacy Practice.

In his report, Mr Gilbar described the hazard of accidental intrathecal administration of vincristine, which can lead to fatal consequences, resulting from the inadvertent attachment of a vincristine-containing syringe to a spinal needle, for example.

Mr Gilbar reported that in a study of 21 hospitals in Switzerland, 76% used small-volume syringes for vincristine administration, and the study researchers found inadequate adherence to international recommendations for safe treatment with vincristine. “These results, particularly coming from an affluent well-educated country, are extremely concerning and disheartening,” Mr Gilbar wrote.

He detailed efforts to raise awareness around the issue. In one international survey, 61.1% of responses suggested that mini-bags were in use for vincristine administration, and Australia and New Zealand appeared to be leaders in implementation of mini-bag usage for vincristine. Mr Gilbar also noted that in some hospitals around the world, limited access to mini-bags has been a hindrance to safer practices.

“In many countries there has been a lack of progress in banning the syringe for vincristine administration and, not surprisingly, unnecessary deaths have continued to occur,” Mr Gilbar wrote. He concluded with a call to ban the use of syringes in the delivery of vincristine and vinca alkaloids in general. 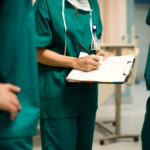