Does pregnancy affect the risk of other cancers?

Research has shown the following with regard to pregnancy and the risk of other cancers:

Does fertility treatment affect the risk of breast or other cancers?

Women who have difficulty becoming pregnant or carrying a pregnancy to term may receive fertility treatment. Such treatment can include surgery (to repair diseased, damaged, or blocked fallopian tubes or to remove uterine fibroids, patches of endometriosis, or adhesions); medications to stimulate ovulation; and assisted reproductive technology.
Ovarian stimulation and some assisted reproductive technologies involve treatments that temporarily change the levels of estrogen and progesterone in a woman’s body. For example, women undergoing in vitro fertilization (IVF) receive multiple rounds of hormone treatment to first suppress ovulation until the developing eggs are ready, then stimulate development of multiple eggs, and finally promote maturation of the eggs. The use of hormones in some fertility treatments has raised concerns about possible increased risks of cancer, particularly cancers that are linked to elevated levels of these hormones.

• Breast cancer: The bulk of the evidence is consistent with no increased risk of breast cancer associated with the use of fertility drugs or IVF.31–34

• Ovarian cancer: There is some uncertainty about whether treatment for infertility is a risk factor for ovarian cancer. A 2013 systematic review of 25 studies that included more than 180,000 women found, overall, no strong evidence of an increased risk of invasive ovarian cancer for women treated with fertility drugs.35 In one study, women who underwent IVF had an increase in risk of ovarian borderline malignant tumors.36

14. Collaborative Group on Hormonal Factors in Breast Cancer. Breast cancer and breastfeeding: collaborative reanalysis of individual data from 47 epidemiological studies in 30 countries, including 50,302 women with breast cancer and 96,973 women without the disease. The Lancet 2002; 360(9328):187–195.

30. Persson I. Estrogens in the causation of breast, endometrial and ovarian cancers―evidence and hypotheses from epidemiological findings. Journal of Steroid Biochemistry and Molecular Biology 2000; 74(5):357–364. 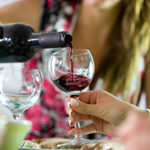 ASCO: Alcohol Is A Modifiable Risk Factor for Cancer