“Contrary to our hypothesis that patients who rang the bell would report an improved memory of the distress of treatment, we found that patients who rang the bell reported a worse memory of how ‘distressful’ the cancer treatment was,” said radiation oncologist Patrick A. Williams, MD, who led the study while completing his residency at the University of Southern California (USC) Keck School of Medicine in Los Angeles.

He and his colleagues adopted a psychological principle named the “peak-end rule,” and hypothesized that ringing the bell would improve patients’ perceptions of the overall distress from their cancer treatment. For this investigation, they enrolled 210 patients who completed definitive radiation therapy at a single-center outpatient radiation oncology clinic. A bell was installed in the clinic and 107 of the patients rang the bell on their final day of treatment. The other 103 participants, the control group, did not ring the bell.

Patients evaluated their overall distress from cancer treatment using a survey composed of an 11-point numerical rating scale in combination with the Verbal Rating Scale. The bell group reported worse overall distress scores compared with those who did not participate in a bell-ringing celebration (mean SD [standard deviation] 5.6 vs 4.7) at a mean follow-up of 103 days. This difference was more pronounced at 130 days follow-up (6.4 vs 5.1).

Ringing the bell may create a “flashbulb event,” becoming more deeply embedded in the memory, explained Dr Williams. So, instead of reflecting on the good feelings that come with completing treatment, ringing the bell is more associated with the treatments and their side effects. In this study, all the patients completed a questionnaire on their final day of treatment, just after ringing the bell if they were in the bell group, and again at follow-up. “Even 3 months after treatment was completed, the bell-ringing group still reported a worse memory of the distress of treatment. Of note, their treatment characteristics were no different. That is, both groups received the same amount of treatment, but the bell group had a worse perception of how bad the treatment was if they rang a bell on the final day,” reported Dr Williams.

Dr Williams’ study is the first prospective study to report on patients’ distress regarding the cancer bell ceremony months later in follow-up as well as on the final day. Although more studies may be warranted, there also is concern about patients whose treatment will not end with a cure. The bell ringing may cause them to feel anger, resentment, or depression because they will not likely be given the chance to ever ring a bell. Dr Williams is worried that the ceremony, which is meant to signify the beginning of cancer-free life, could set up false hope for the patients who suffer recurrence.

“The victory bell tradition started at MD Anderson Cancer Center in 1996, when a patient with head and neck cancer installed a brass bell in the radiation department to ring loudly at the end of his treatment,” said Kevin J. Gale, BA, a second-year medical student at the University of Minnesota Medical School, Minneapolis. The tradition is now widespread, and 51 of the 62 National Cancer Institute–designated cancer centers have some sort of bell-ringing tradition in place. “I gathered this statistic by actually calling and writing each of these cancer centers, and asking whether they had a victory bell in place,” said Mr Gale. 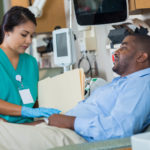