“Cell-free DNA is released to the circulation from cancer cells undergoing apoptosis or necroptosis in the primary or metastatic cancer lesions and can be detected in the blood,” said Filip Janku, MD, PhD, assistant professor of Investigational Cancer Therapeutics (Phase I Clinical Trials Program) at The University of Texas MD Anderson Cancer Center in Houston. This study used the Idylla BRAF mutation test, which is based on polymerase chain reaction (PCR). Idylla is a system made by Biocartis, the sponsor of the study.

“Unlike performing tissue biopsies, obtaining blood samples to isolate cell-free DNA is a minimally invasive approach with less risk to the patients at a lower cost. The samples can be collected at multiple time points and provide valuable information about the genetic changes that occur during the course of the disease, as this is not a static process,” he added.

“We developed Idylla BRAF Mutation Test, a fully integrated quantitative allele-specific real-time PCR-based test that uses a single disposable cartridge. We demonstrated that testing for BRAF V600 mutations in plasma cell-free DNA using this test is feasible, has comparable sensitivity and specificity to other PCR or next-generation sequencing methods, and has an unprecedented short turnaround time,” Janku said.

“Our results suggest that high amounts of BRAF-mutant cell-free DNA before therapy is a negative prognostic biomarker for survival and outcomes of targeted therapy. It was somewhat counterintuitive since one would assume that more BRAF-mutant copies in the circulation would rather predict better outcomes with BRAF-targeted therapies,” Janku said. “We also showed that a decrease in the amount of BRAF-mutant cell-free DNA in sequentially collected plasma samples correlates with better treatment outcomes.” 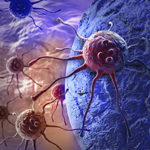