The use of antibiotics during immune checkpoint inhibitor (ICI) therapy can lead to reduced efficacy of the ICI treatment, according to the results of a new study. The study findings were reported in the American Journal of Clinical Oncology.

The study was a retrospective analysis of patients treated at a single institution from January 2011 through December 2018 using ICI therapy, alone or in combination with other anticancer treatment, for an advanced or metastatic cancer. Data were retrieved from electronic health records, and analyses primarily involved response to ICI therapy. Histopathologic evaluations of the tumor microenvironment were also conducted in a small number of patients following the use of antibiotic treatment. The time period for overall analysis of any impacts of antibiotic therapy included the 12 weeks before and 12 weeks after the start of ICI therapy.

A total of 414 patients were identified as receiving ICI therapy for a variety of cancer diagnoses. The most common ICI therapies represented in this population were nivolumab, pembrolizumab, and atezolizumab. Other classes of anticancer therapies were also used in 12% of patients. Of the 414 patients receiving ICI therapy, 207 were found to have been given antibiotic treatment within the 12 weeks before or the 12 weeks following the start of ICI therapy.

Histopathologic analysis of the tumor microenvironment was possible for 9 patients who had available specimens. Results suggested possible differences following antibiotic therapy. However, this analysis of a small number of patients presented some limitations.

The study investigators concluded that ICI efficacy is negatively affected by the use of antibiotics during ICI treatment, particularly within the first 6 weeks after initiation of the ICI therapy. 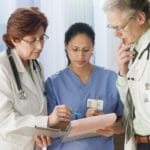