Gatastatin, an inhibitor specific for γ-tubulin, known to be overexpressed in some cancer cells, has been identified and holds potential for the development of anticancer agents. These findings were published in Nature Communications (doi:10.1038/ncomms9722).

Cancer therapy and biologic research regularly uses inhibitors of microtubule assembly that target α/β-tubulin. However, none had been identified for γ-tubulin, which is known to activate during cell division and to be overexpressed in some cancer cells.

The γ-tubulin specific inhibitor gatastatin was developed through a collaboration between Takeo Usui, PhD, and Hideo Kigoshi, PhD, both at the University of Tsukuba in Tsukuba, Japan, and Heidelberg University, Okayama University, Tokyo University of Pharmacy and Life Sciences, and RIKEN. These researchers evolved previously developed inhibitors of β-tubulin to create gatastatin.

Gatastatin was found to block γ-tubulin–dependent microtubule nucleation without affecting the polymerization of α/β-tubulin. During the cell cycle, γ-tubulin has continuous importance. The results of these studies provide knowledge linking to analyses of intracellular γ-tubulin function as well as the development of new anticancer agents. 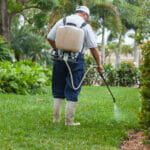