Acrylamide is also found in some foods. It can be produced when vegetables that contain the amino acid asparagine, such as potatoes, are heated to high temperatures in the presence of certain sugars (1, 2). It is also a component of tobacco smoke.

How are people exposed to acrylamide?

Food and cigarette smoke are the major sources of acrylamide exposure for people in the general population (3, 4).

Acrylamide levels in food vary widely depending on the manufacturer, the cooking time, and the method and temperature of the cooking process (5, 6). Decreasing cooking time to avoid heavy crisping or browning, blanching potatoes before frying, not storing potatoes in a refrigerator, and post-drying (drying in a hot air oven after frying) have been shown to decrease the acrylamide content of some foods (7, 8).

People are exposed to substantially more acrylamide from tobacco smoke than from food. People who smoke have three to five times higher levels of acrylamide exposure markers in their blood than do non-smokers (9). Exposure from other sources is likely to be significantly less than that from food or smoking, but scientists do not yet have a complete understanding of all sources of exposure. Regulations are in place to limit exposure in workplaces where acrylamide may be present, such as industrial settings that use polyacrylamide and acrylamide copolymers.

Is there an association between acrylamide and cancer?

Studies in rodent models have found that acrylamide exposure increases the risk for several types of cancer (10–13). In the body, acrylamide is converted to a compound called glycidamide, which causes mutations in and damage to DNA. However, a large number of epidemiologic studies (both case-control and cohort studies) in humans have found no consistent evidence that dietary acrylamide exposure is associated with the risk of any type of cancer (9, 14). One reason for the inconsistent findings from human studies may be the difficulty in determining a person’s acrylamide intake based on their reported diet.

The National Toxicology Program’s Report on Carcinogens considers acrylamide to be reasonably anticipated to be a human carcinogen, based on studies in laboratory animals given acrylamide in drinking water. However, toxicology studies have shown that humans and rodents not only absorb acrylamide at different rates, they metabolizeit differently as well (15–17). 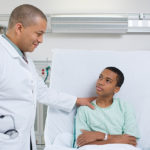