Its prevalence and incidence are geographically heterogeneous, with the highest rates in Asia, especially Southeast Asia.8 The incidence rate varies significantly between different regions from 5% in Japan to 20% in Korea or even more significant with a 90% incidence in Thailand.9

Extrahepatic cholangiocarcinomas can be subdivided according to the Bismuth classification (Table 2). Other classifications are based on macroscopic appearance of both intra-and extrahepatic tumors (Table 3). 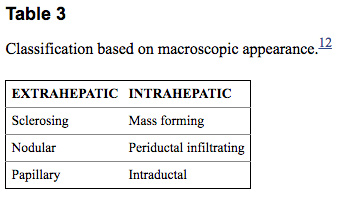