Between July 2008 and June 2011, 248 consecutive patients with newly diagnosed esophageal cancer underwent CCRT at the cancer center of Wenzhou Medical University. Of these patients, 82 (33.1%) patients aged over 70 years were retrospectively reviewed. This study was approved by the Institutional Review Boards of Wenzhou Medical University, and patients’ records were anonymized and deidentified prior to analysis. The main reasons for indication of CCRT and/or contraindication of surgery were rejection of surgery (n=19) or no indication of surgery because of advanced age (n=16), lower Eastern Cooperative Oncology Group (ECOG) performance status (PS) (n=18), severe comorbidity (n=14), or tumor location (cervical esophagus) (n=15).

PTX (135 mg/m2) was administered intravenously over 3 hours on day 1 and day 29 with standard premedications. CDDP (30 mg/m2) was administered as an intravenous infusion on days 1–3 and days 29–31. Radiotherapy was given concurrently on the 1st day of the first cycle of chemotherapy (Figure 1). The gross tumor volume (GTV) received 60 Gy (30 fractions at 2 Gy per fraction) and clinical target volume (CTV) was 40 Gy (20 fractions at 2 Gy per fraction). Radiotherapy was delivered in three-dimensional conformal technique, and no intensity-modulated radiotherapy was used. The definition of GTV, CTV, and dose-volume constraints of normal tissue in our institute has been described previously.13,19 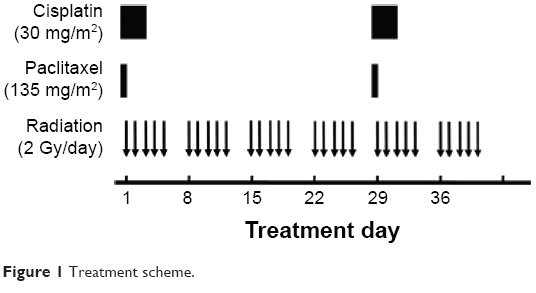 Chemotherapy was delayed for acute toxicities until recovery to grade ≤1, and/or the dose was reduced for grade 3 or higher hematological toxicity. PTX was reduced to 80% in the second course if any of the following occurred: grade 3 neutropenia with fever or grade 4 neutropenia. Granulocyte colony-stimulating factor (G-CSF) was used to treat for the occurrence of febrile neutropenia. If the creatinine clearance decreased to less than 50 mL/min, the CDDP dose was also reduced to 80%. Irradiation was interrupted for grade ≥3 esophagitis, grade 3 neutropenia with fever, or grade 4 neutropenia. Radiation therapy was restarted when toxicities recovered to grade ≤2.

All the patients were hospitalized and monitored weekly during the treatment course for acute treatment toxicity. Physician-reported hematological, esophageal, and pulmonary toxicities were evaluated according to the common toxicity criteria for adverse events version 3.0. Clinical response was assessed according to Response Evaluation Criteria in Solid Tumors system 4 weeks after the completion of treatment, and follow-up was regularly carried out at 3-month interval in the first 2 years and at 6-month interval after 2 years. Treatment failure was defined as any sign of recurrent disease, which could be local, distant, or both. And, we also assessed failure models by posttreatment esophagogram, endoscopy, computed tomography (CT), or integrated positron emission tomography/CT (if available) scans and compared those data with the original CT-based radiation treatment plans.