A stool DNA test (Cologuard) for colorectal cancer was found to be an accurate noninvasive screening option for Alaska Native people, a population with one of the highest rates of colorectal cancer in the world, according to a study published in Mayo Clinic Proceedings (2015; doi:10.1016/j.mayocp.2015.10.008).

The study was conducted by researchers from the Alaska Native Tribal Health Consortium and Mayo Clinic.

The remote residence of many Alaska Native people in sparsely distributed communities across vast roadless regions creates a barrier to screening with conventional tools, such as colonoscopy. Notably, a positive stool DNA test result necessitates undergoing a colonoscopy.

Stool DNA testing, which was recently approved by the US Food and Drug Administration (FDA), may offer a workable and effective screening method for this population. Another current option is the fecal immunochemical test (FIT), which tests for hidden blood in the stool. FIT only detects human blood from the lower intestines, but is much less expensive than the Cologuard test.

The stool DNA test is a noninvasive screening tool that identifies characteristic chemical changes in stool that signal the presence of cancer or precancerous polyps. The test requires no bowel preparation, no diet or medication restrictions, and can be done from home via a mailed sampling kit, as can the FIT testing.

In the study conducted out of Anchorage, Alaska, 661 Alaska Native participants submitted stool samples prior to a prescheduled screening colonoscopy, which served as the reference standard. Stool DNA testing was performed in separate laboratories by technicians unaware of the clinical source of specimens.

The stool DNA test detected 100% of colorectal cancers (10 of 10). Stool DNA test sensitivity for precancerous polyps increased significantly in proportion to polyp size and the related risk of progression to cancer.

Detection via the stool DNA test was 80% for the largest polyp group (3 cm or larger). For the important subset of patients with the sessile serrated polyp type (approximately one-third of all cancers and typically located on the far side of the colon) differences between stool detection rates were striking, say the researchers. Stool DNA testing detected 67% of polyps larger than 1 cm, compared with just 11% by fecal occult blood testing.

“The high detection rates of cancer and large polyps by stool DNA that we found in the Alaska Native population are remarkably similar to those demonstrated in the multicenter 10,000 patient screening study of the general US population reported in the New England Journal of Medicine in 2014,” said David Ahlquist, MD, co-author and inventor of the stool DNA test. 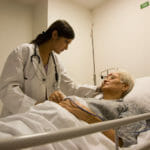