Results of a retrospective analysis of patients with a suspected local recurrence of distal rectal cancer following achievement of complete clinical response with neoadjuvant chemoradiation (CRT) showed that almost all of these patients were able to undergo subsequent curative-intent treatment.These findings were published on Annals of Surgery.1

Given the potential for significant postoperative morbidity and mortality with radical rectal surgery, a previously conducted landmark study compared clinical outcomes of patients with resectable, distal rectal cancer treated with neoadjuvant CRT who either achieved a clinical complete response and were followed by observation alone (ie, a “watch-and-wait” approach) or achieved an incomplete clinical response to neoadjuvant CRT, underwent surgery, and were subsequently classified as having pT0N0M0 disease.2

Notably, however, it has been estimated that between 15% and 30% of patients with resectable, distal rectal cancer undergoing observation alone subsequent to achievement of a complete clinical response following neoadjuvant CRT will experience a local recurrence of disease, raising potential concerns of a negative impact of this approach on the suitability and success of future treatment interventions, as well as the long-term outcomes for this subgroup of patients.1

This multicenter study focused on 2 cohorts of patients diagnosed with resectable, distal rectal cancer who received surveillance alone as part of 1 of 2 prospective studies of the “watch-and-wait” approach subsequent to achievement of a near-complete or complete clinical response following neoadjuvant chemoradiation or neoadjuvant short-course radiotherapy.1

During the study period, 89 patients (23%) of the 385 patients included in the overall patient cohort were found to have a suspected local recurrence of distal rectal cancer.

At a median follow-up of 28 months, the median time from completion of neoadjuvant therapy and detection of local regrowth of disease was 9 months.1

Pathologic examinations of surgical specimens revealed luminal regrowth only (73%), both luminal and nodal regrowth (11%), nodal metastases only (2%), and no tumor (11%).1

The 2-year local recurrence-free rate was 97.8% for the 84 patients who underwent surgery following suspected local regrowth of disease. Of the 4 patients experiencing a local recurrence, 2 who were initially treated with local excision only were able to subsequently undergo APR or LAR. Rates of 2-year DFS and OS were 90.3% and 98.4%, respectively, and 91.8% of these patients were free of distant metastasis at 2 years.1

In their concluding remarks, the study authors stated that “our data suggests that the initial primary surgery treatment options for rectal cancer are almost always available in patients with local regrowth. Additionally, organ-preservation after local regrowth was still possible in selected patients. Furthermore, there seems to be no increased risk of surgical complications after the delayed surgical treatment.”1 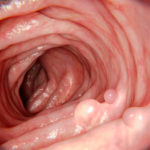