Abstract: Regorafenib, an oral multikinase inhibitor, was approved in September 2012 by the US Food and Drug Administration for the treatment of patients with metastatic colorectal cancer. Since this time, however, few case reports outlining real-world usage have been published in the literature. Here, we detail the clinical history of an elderly woman with KRAS wild-type colon cancer who received regorafenib after prior treatment with other agents. We show that by employing dose modification strategies to address adverse events, this patient was able to remain on therapy for 11 months and achieve stable disease.

Colorectal cancer (CRC) is one of most common cancers and leading causes of mortality in the USA, accounting for approximately 136,000 new cases and 50,000 deaths per year.1 For metastatic or unresectable CRC, standard first- and second-line treatments typically involve a combination of cytotoxic chemotherapies (eg, FOLFIRI [5-fluorouracil + oxaliplatin + irinotecan])2,3 and molecular targeted agents (eg, bevacizumab, cetuximab, panitumumab),4–6 which can help to improve progression-free survival and overall survival. However, due to the nature of the disease, many patients will progress through guideline-recommended standard regimens while maintaining a good performance status. Regorafenib, an oral multikinase inhibitor, which targets angiogenic, stromal, and oncogenic receptor tyrosine kinases, was approved by the US Food and Drug Administration in 2012 for the treatment of patients with metastatic CRC who have been previously treated with fluoropyrimidine-, oxaliplatin-, and irinotecan-based chemotherapy, an anti–vascular endothelial growth factor (VEGF) therapy and, if KRAS wild-type, an anti–epidermal growth factor receptor (EGFR) therapy.7 This approval was based on the CORRECT study, which demonstrated a median overall survival of 6.4 months with regorafenib vs 5.0 months with placebo (hazard ratio, 0.77; 95% confidence interval, 0.64–0.94; P=0.0052).8 Among the most common adverse effects were fatigue, hand–foot skin reaction, diarrhea, hypertension, and rash. Here, a case of an elderly patient on regorafenib who achieved stable disease for over 11 months with strategic dose modifications was presented.

The following report describes a patient with metastatic CRC who was treated with regorafenib. No ethics approval was needed for the care of this patient as all treatments were in accordance with institutional best practices. Verbal consent to appear in this case study was given by the patient to Dr Seery. A 73-year-old Indian female with a past medical history of hypertension and hypercholesterolemia was diagnosed in September 2010 with left-sided adenocarcinoma of the colon. The patient had no history of smoking, alcohol consumption, or any family history of cancer. The patient initially had symptoms of hemoptysis for approximately 2 weeks and then subsequently developed hematochezia for 3 days. Due to these symptoms, the patient underwent a colonoscopy, which revealed left-sided colon cancer. A left hemicolectomy was performed; pathology revealed a stage IIIB well-differentiated, KRAS wild-type adenocarcinoma, with one out of 15 lymph nodes testing positive. The patient moved back to India and did not receive adjuvant chemotherapy due to patient preference.

In March 2011, the patient returned to the USA with complaints of mild abdominal distention, and a subsequent positron emission tomography/computed tomography (PET/CT) scan showed evidence of recurrence, with ovarian and peritoneal metastases. A biopsy was performed, which revealed CK20 positivity, consistent with colonic adenocarcinoma. The patient began treatment with capecitabine, oxaliplatin, and bevacizumab, and developed an anaphylactic reaction in the sixth cycle. She continued with single-agent capecitabine for an additional two cycles and completed therapy in June 2011 as there was no further evidence of disease on the PET/CT scans.

The patient did not receive any additional therapy until early 2012 when she was restaged and was again noted to have diffuse metastatic disease in the peritoneum, with imaging consistent with moderate to extensive carcinomatosis. The patient received cetuximab and FOLFIRI from February 2012 through August 2012 and achieved an excellent response, with the PET/CT scan showing no evidence of measurable disease, with some minimal hypodensities in the liver that were not PET avid. Therapy was discontinued at that time as the patient preferred an active surveillance approach.

The patient did well until April 2013 when she experienced increased abdominal distention, bloating, and difficulty with defecation. The patient received a repeat CT scan that showed progression of the disease, with a large pleural-based mass in the right lower lobe with bilateral pleural effusions, ascites, and multiple peritoneal implants, as well as omental infiltration along with a possible L3 lytic lesion. Also, the patient’s carcinoembryonic antigen (CEA) values had increased to 23. As a result, the patient was restarted on cetuximab and FOLFIRI in May 2013; however, a PET/CT scan 2 months later revealed a mixed response, with persistent fluorodeoxyglucose-avid right pleural disease, but also some areas of decreased activity with stable nodal disease in the left axilla, retroperitoneum, and pelvis, and increased activity in the left inguinal and right retrocrural nodes. There was also resolution of pleural effusion and ascites. The patient continued with cetuximab and FOLFIRI until August 2013, and a repeat PET/CT scan in September 2013 revealed progressive disease in the right pleural mass along with increase in size of the retrocrural and left inguinal lymph nodes and liver (Figure 1A). The patient’s CEA was 8.3 in October 2013. 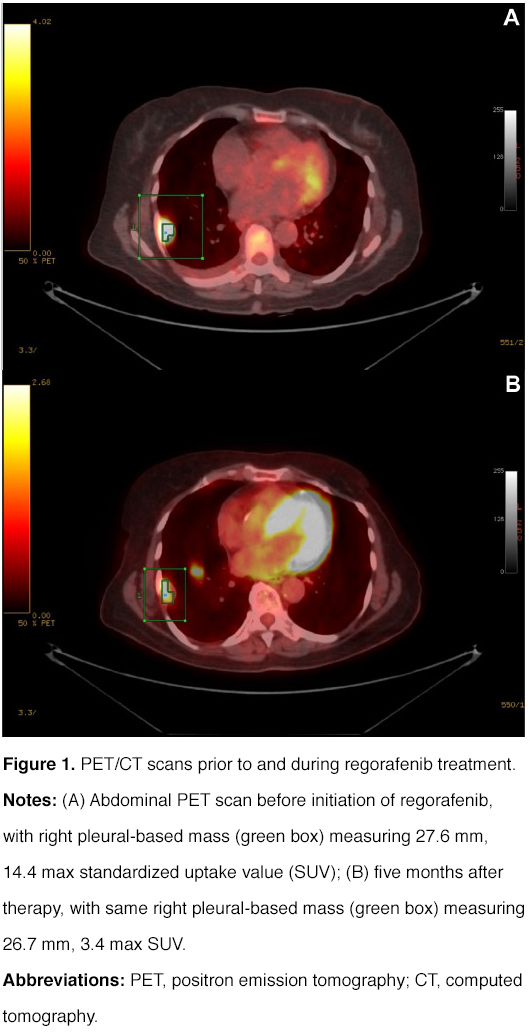 The patient was started on regorafenib 160 mg daily on September 12, 2013, but required a treatment interruption due to hypertension with consistent systolic blood pressure readings in the range of 170 mm Hg and diastolic blood pressure in the range of 100 mm Hg, as well as Grade 3 fatigue during cycle 1. The patient was started on antihypertensive medications, and regorafenib was held for 2 weeks to resolve these adverse events. After this treatment interruption, regorafenib was restarted at a dose of 120 mg. The dose was then reduced again due to Grade 3 fatigue, and the patient’s dose was stabilized at 80 mg daily.

A repeat PET/CT scan in February 2014 showed a mixed response, with increased activity in non-target lesions noted in multiple omental, peritoneal, and pelvic lesions, but decreased activity in target lesions, specifically the thoracic and liver lesions, with new activity in the right tenth rib (Figure 1B). Specifically, a right pleural-based mass had decreased from 27.6 mm to 26.7 mm, and standardized uptake value decreased from 14.4 to 3.4 in conjunction with a decrease in disease measuring from 58.0 mm to 43.6 mm in the central pelvic mesentery superior extending to the uterine fundus. The patient’s CEA decreased to 3.7, while Eastern Cooperative Oncology Group (ECOG) performance status improved from 2 to 1, and treatment was therefore continued at 80 mg daily. The patient’s most recent PET/CT scan in August 2014 showed frank progression of disease, with an increase in number and activity of multiple metastatic pulmonary and hepatic lesions along with increased activity in omental and mesenteric implants. As of August 2015, the patient has been on regorafenib for 11 months with progression; however, her ECOG performance status remains at 1, and she would like to continue taking the medication as she does not have any side effects and feels her quality of life has improved.

Verbal consent was obtained from the patient prior to her departing our facility for hospice care. The patient’s identification has been protected and any information which could potentially be used to reveal the identity of the patient has been removed.

We reported on a case of an elderly woman with KRAS wild-type, refractory metastatic colon cancer who has received multiple chemotherapy regimens, most recently regorafenib for 11 months with minimal side effects and palliation of symptoms. The report shows that regorafenib can provide a decrease in tumor burden and improve quality of life with prolonged survival if an appropriate dose is used in terms of balancing side effects with benefits of symptom palliation. Moreover, the report shows that continuing therapy beyond disease progression is no longer an absolute contraindication. This case report additionally demonstrates that close and frequent follow-ups by the primary oncologist is needed in order to monitor side effects and to find the effective and tolerable dose. In the CORRECT study, the frequency of adverse events was shown to peak during the first cycle and gradually taper off with subsequent cycles.8 This report suggests that regorafenib can be a viable option for patients who still have a good performance status and have progressed through other regimens. Importantly, patient and financial support services are in place through the REACH program to help patients manage the cost of this therapy.

Tara Seery has received compensation from Bayer HealthCare and Celgene for participation in Advisory Board meetings. The authors report no other conflicts of interest.