The cost of treating colorectal cancer varies widely across the world, according to a systematic review published in the European Journal of Surgical Oncology.

Researchers analyzed data from the United States, Europe, and Asia and found substantial variations in per-patient costs for surgery, chemotherapy, and radiotherapy.

None of the studies were from low-income countries or countries with the highest colorectal cancer incidence, such as Australia. Most studies (n=11) were retrospective in nature.

The researchers found that the costs of treating colorectal cancer varied substantially across the studies, despite similar clinical settings and study perspectives. The average cost per patient, in 2018 USD, ranged from:

“Overall, the cost of radiotherapy was consistently cheaper than chemotherapy, which is not surprising as radiotherapy is mostly only used for treating rectal cancer,” the researchers wrote. “Interestingly, the relative costs of surgical intervention versus chemotherapy varied substantially between studies, most likely due to variations between countries in relation to treatment algorithms, the availability of different treatments, and differences in how surgical complications were measured and funded.”

“These variations might also be explained by the fact that individual countries charge differently for the various treatments provided or that there may be local commercial arrangements resulting in some treatments being cheaper for some countries than others,” the researchers added. 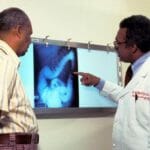 Additional Biopsies After CRC Biopsy Not Tied to Metachronous CRC