Objective: The prevalence of breast cancer in elderly women (older than 80 years) is expected to rise more dramatically than its incidence. In this study, we evaluated the evidence for treatment guidelines for elderly breast cancer patients.

Patients and methods:All included patients were enrolled from 2010 to 2013 from the Surveillance, Epidemiology, and End Results (SEER) database. The Akaike information criterion (AIC) and Harrell’s C statistic were used to perform comparisons. In addition, a propensity score analysis was used to avoid bias caused by data selection criteria. Prognostic factors were selected as nomogram parameters to develop a model to predict survival.

Results:A total of 16998 patients included in the SEER database from 2010 to 2013 had breast cancer and fulfilled the study criteria. Of whom, 13007 patients underwent surgery. Overall survival and cancer-specific survival were significantly better in patients who underwent surgery and/or radiotherapy than in those who did not (P<0.001). In addition, a nomogram system with a Cindex of 0.83 and an AIC index of 11112.85 was better able to predict prognoses and estimate cancer-specific survival in elderly patients with breast cancer.

Breast cancer is currently the most common cancer in female patients. The prevalence of breast cancer in elderly women (older than 80 years) is expected to rise even more dramatically than its incidence. The average age for a diagnosis of breast cancer is 61 years, and most breast cancer-related deaths occur in patients with an average age of 65 years or older.1 A study has shown that there are many differences in the prevalence of strategies used to treat breast cancer between younger and older women.2 However, most studies have focused on younger patients. There is a lack of strong evidence for any specific treatment guidelines in elderly patients. The relevant prognostic factors, the best surgical approach and the most suitable treatment strategy for elderly patients with breast cancer remain unclear. In particular, in patients older than 80 years, the influences of various kinds of factors on breast cancer, and specifically on breast cancer-related mortality, remain unknown.3 Age is a clinically important prognostic factor when determining which treatment modality to use and when estimating overall survival, and it may influence which treatment strategy is ultimately chosen. The choice of surgical approach and subsequent treatment strategies remains controversial in these patients. This is especially important because the majority of elderly patients die because of nonbreast cancer-related reasons.4

In this study, we first investigated the clinicopathological characteristics of elderly patients with breast cancer. Second, we attempted to identify the prognostic factors (including clinical and pathological factors) that will be most useful to clinicians making treatment decisions. Finally, we built a nomogram-derived overall survival estimation system that can be used to provide more accurate predictions of overall survival and cancer-specific survival.

The data collected included patient demographic information, pathological information, clinical procedures and cancerspecific survival in patients with breast cancer. All data collected into the Surveillance, Epidemiology, and End Results (SEER) database from 2010 to 2013 were included to avoid bias caused by changes in treatment strategies over time. The definition of “local” and “radical” surgical approaches is in the Appendix C document in the SEER website. The local approach includes partial mastectomy and subcutaneous mastectomy. The radical approach includes total mastectomy, modified radical mastectomy, radical mastectomy and extended radical mastectomy. The following inclusion criteria were used: 1) patients with pathologically diagnosed breast cancer; 2) patients who were older than 80 years; 3) the exact pathological details were accessible and 4) cancer-specific survival was available. In our study, a signed SEER research data agreement form was provided to the SEER program and we were given approval to access and analyze SEER database, which is a public database that does not require ethical approval. 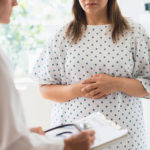