This statistically significant and clinically meaningful OS benefit supports the use of sacituzumab govitecan as a novel therapy for this patient population, according to Hope S. Rugo, MD, of the University of California, San Francisco. Dr Rugo presented these results at ESMO Congress 2022.

The patients were randomly assigned to receive sacituzumab govitecan (n=272) or physician’s choice of treatment (n=271). Physician’s choice included capecitabine, vinorelbine, gemcitabine, or eribulin. Patients in both arms were treated until progression or unacceptable toxicity.

The median ages at baseline were 57 (range, 29-86) years in the sacituzumab govitecan arm and 55 (range, 27-78) years in the comparator arm. The median number of prior chemotherapy regimens for metastatic disease was 3 in each group.

The study’s primary endpoint was progression-free survival (PFS). Prior results showed a significant improvement in PFS with sacituzumab govitecan. At a median follow-up of 10.2 months, the median PFS was 5.5 months with sacituzumab govitecan and 4.0 months with physician’s choice of therapy (hazard ratio [HR], 0.66; 95% CI, 0.53.-0.83; P =.0003).

Safety results for the sacituzumab govitecan arm were consistent with prior results, and no new safety signals were observed.

Disclosures: This research was supported by Gilead Sciences, Inc. Some study authors declared affiliations with biotech, pharmaceutical, and/or device companies. Please see the original reference for a full list of disclosures. 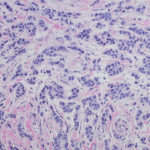 Chemo Does Not Improve Long-Term Outcomes in Early-Stage ILC