Abstract: Alteration of the phosphatidylinositol 3-kinase (PI3K)/AKT/mammalian target of rapamycin signaling pathway is key for the growth and survival of several cancers, including breast cancer. In addition, dysregulation of PI3K signaling may contribute to resistance to several anticancer agents. PI3K inhibitors may, therefore, be effective as antineoplastic therapy. Buparlisib is a potent and highly specific oral inhibitor of the pan-class I PI3K family. Buparlisib specifically inhibits class I PIK3 in the PI3K/AKT kinase signaling pathway in an ATP-competitive manner, thus inhibiting the production of the secondary messenger phosphatidylinositol (3,4,5)-trisphosphate and activation of the PI3K signaling pathway. This may induce inhibition of tumor cell growth and survival in susceptible tumor cell populations. Buparlisib is currently under investigation in patients with a variety of solid tumors, including breast cancer. Buparlisib has been validated as a promising anticancer agent, and tremendous efforts have been taken to develop it. However, buparlisib monotherapy has resulted in humble benefit so far. Results from studies combining buparlisib with different anticancer agents – namely, endocrine therapy, anti-HER2 therapy, and chemotherapy – have showed variable efficacy with consistent substantial toxicity.

Phosphoinositide 3-kinase (PI3K) pathway, a critical signal transduction system which links oncogenes and several receptor classes to different key cellular functions, is one of the most widely activated signaling pathways in cancer.1

There are three classes of PI3Ks which differ in their structural characteristics and substrate specificity.5,6 Class I enzymes are the most commonly studied; they are activated directly by cell surface receptors. Furthermore, class I PI3Ks are divided into class IA enzymes, which are activated by RTKs, GPCRs, and some oncogenes such as the small G protein Ras, and class IB enzymes, which are regulated only by GPCRs.

These enzymes – through the formation of the second messenger phosphatidylinositol (3,4,5)-trisphosphate – activate many target proteins, most notably phosphoinositide-dependent kinase-1. The downstream targets of these protein kinases, such as mammalian target of rapamycin (mTOR), BCL2-associated agonist of cell death, and forkhead box O proteins, regulate proliferation, growth, and survival.7

Alteration of the PI3K/AKT/mTOR pathway is key for the growth and survival of several cancers, including breast cancer (BC). Different aberrations in the PI3K signaling pathway, such as PI3K mutation/amplification, loss/mutation of the phosphatase and tensin homologue, AKT overexpression/overactivation, and modulation of tuberous sclerosis protein 1 and 2 tumor suppressors, may be often observed in BC, predominantly in hormone receptor-positive (HR+) tumors.8 Especially, as PI3K is the most proximal component of the pathway, targeting PI3K itself rather than AKT or mTOR with PI3K inhibitors may induce pronounced inhibition of the downstream components within the pathway. Many inhibitors of mTOR have been developed for the treatment of cancers, mostly analogs of rapamycin, which specifically inhibit the activity of the TORC1 complex.9However, specific inhibition of TORC1 results in a feedback stimulation of AKT, thus providing an inferior therapeutic efficacy compared to inhibition of PI3K and both TORC complexes.10 Moreover, activation of PI3K pathway may be associated with resistance to a variety of antitumor agents.11–13

HR+ tumor is the most frequent subtype of BC, with endocrine therapy (ET)-based regimens being its backbone of treatment.14,15 However, HR+ BC is not homogeneous, but characterized by different genomic alterations that on one hand may affect treatment outcomes and on the other hand may offer many therapeutic opportunities with the use of targeted agents.14,16 Of particular interest, activating PIK3CA mutations (which encode the p110α isoform of PI3K) are frequently detected in HR+ BC and are possibly associated with disease progression and resistance to ET.14,17–19

Roughly, 40% of human epidermal growth factor receptor 2-positive (HER2+) BCs harbor activating mutations in PIK3CA.14 These two oncogenes have different functions and may work together to stimulate tumor growth. Several anti-HER2 agents are approved for the treatment of patients with HER2-positive BC. Nonetheless, both de novo and acquired resistance to anti-HER2 therapies may occur.20 PIK3CA mutations might be implicated in conferring resistance to these therapies.21–23 Given that PIK3CA-mutant BC appears to have distinct tumor biology, development of more individualized targeted therapies based on the PIK3CA genotype is awaited.

Therefore, targeting PI3K may be a valid therapeutic option in these settings. In order to maximize treatment efficacy, it would be crucial to identify those patients with PIK3CA mutations who might derive the greatest benefit from PI3K inhibitors.

Several clinical studies have been conducted – mainly in the setting of HR+/HER2− metastatic disease – to explore the combination of endocrine therapies with agents targeting PI3K/Akt/mTOR, such as PI3K inhibitors (panspecific or specific to the subunit 110 α or δ), AKT inhibitors, mTOR inhibitors, or dual inhibitors of mTOR and PI3K. Among these drugs, everolimus is the only PI3K inhibitor approved in combination with exemestane for the treatment of postmenopausal patients with endocrine-resistant HR+/HER2− BC.24 An exploratory analysis of the BOLERO-2 study showed that the benefit of adding everolimus to ET was consistent regardless of PIK3CA alteration.25 AZD2014 is a promising dual inhibitor of mTORC1 (rapamycin sensitive) and mTORC2 (rapamycin insensitive), which is currently under investigation in a randomized Phase II trial (MANTA).26 Temsirolimus was tested in the Horizon study in combination with letrozole, but no benefit in terms of progression-free survival (PFS) was observed compared to letrozole alone.27 The FERGI trial assessed the combination of pictilisib (GDC-0941), an oral inhibitor of multiple class I PI3K kinase isoforms, and fulvestrant.28 This study demonstrated a nonsignificant benefit in terms of PFS in the pictilisib arm compared with the placebo arm (6.2 vs 3.8 months; hazard ratio, 0.77; 95% CI, 0.50–1.19), independent of PIK3CA mutation status.28 Alternative strategies include specific inhibition of subunit α PI3K (alpelisib) or mutated PI3K (taselisib); initial results from the LORELEI study were presented at European Society for Medical Oncology 2017 and showed a benefit in terms of objective response rate for the addition of taselisib to neoadjuvant letrozole in postmenopausal patients with HR+/HER2− early BC. 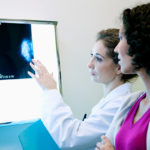