Participation in exercise may reduce mortality compared with nonparticipation in patients with breast cancer, with moderate exercise conferring a greater benefit vs low-level exercise, a study published in the European Journal of Cancer has shown.1

Because a better understanding how lifestyle factors impact survival after breast cancer is paramount, researchers sought to evaluate associations between 2 types of postdiagnosis physical activity and overall survival in survivors of breast cancer.

For the study, investigators analyzed prospective data from 959 breast cancer survivors into a trial prior to diagnosis. A total of 144 deaths from all causes occurred during the study period.

Self-reported physical activity was measured as time per activity, and metabolic equivalent task (MET) hours per week were totaled for each activity.

Compared with nonparticipation, participation in exercise was found to reduce the risk of death by 44% (HR, 0.56; 95% CI, 0.33-0.95); however, there were no significant associations between household or total physical activity and overall survival. 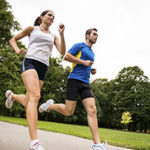