PM correlated strongly negative against TU with r = −0.70 (Table 2A), r = −0.83 (Table 2C), r = −0.53 (Table 2F), ρ = −0.55 (Table 3C), and ρ = −0.55 (Table 3F). Negative correlations between PM and TU were strong when PM at the preceding timepoint was compared to TU at the following timepoint, indicating that changes in PM preceded the inverse change in TU that followed after a time lag, and vice versa (Table 4). This corresponds with the graph of PM following an overall decrease over time, while TU increased overall. Notably, PM experienced few increases throughout its growth over the two-year period assessed, while other tissue types experienced remarkable increases and decreases over time (Fig. 4B).

While cancer-related cachexia is commonly attributed to decreased appetite and chemotherapy side effects, it may correlate strongly with clinical events and/or therapeutic interventions. Our patient’s advanced breast cancer was associated with severe cachexia, which raises the possibility that cachexia is more common than appreciated in many advanced breast cancer patients.

The true incidence of cancer cachexia is likely to be greatly underestimated in many cancers, including breast.7 Recent estimates report that, while metastasis is responsible for ~90% of cancer-related deaths,10 cachexia affects 80% of patients with advanced cancers11 and is thought to be responsible for 20–40% of cancer deaths.7 Several factors could contribute to its underestimation, including its variable presentation and multifactorial etiologies. In a study of 8541 patients diagnosed with cancer in 1999–2004,7 2.5% were written for the ICD-9 code 799.4 for cachexia, but after retrospective investigation, 23% (1975 patients) of the cancer patients met the definition of cachexia, which had not been diagnosed in 20%. Moreover, 25% of the study population had breast cancer and 27% of the 1975 patients with cachexia had breast cancer. This represents a proportion strikingly close to the overall prevalence of breast cancer among the patients considered in the study (27% and 25%, respectively).7

Several factors may lend to the underdiagnosis of cachexia in all cancer patients, especially with cancer subtypes that follow a slower or more indolent course. While there remains a lack of a consensus definition of cachexia (Blum 2011),16 routine assessment of patient muscle loss in comparison to overall weight loss provides insight into the presence of cachexia. Of note, no such routine assessment is made consistently with all cancer patients, though cachexia is considered a “landmark of cancer,” especially in its late stages.7 This could be explored in cachexia animal models, as studies exploring the link between prognostic factors and viable treatments in patients are limited due to a lack of approved effective treatment strategies. A decrease in body mass index or weight was strongly inversely related to survival, in a study by Martin et al, of 8160 cancer patients (Martin 2014).17 Moreover, even if an early diagnosis is made for cachexia, few treatment options exist, with no approved treatments showing significant reversal of cachexia. However, these treatments might temporarily assuage the symptoms of anorexia, weight loss, and insulin resistance,7 further supported by later studies showing that loss of muscle function in cachexia can occur without overt weight loss.4,12

Although cachexia often occurs in advanced cancer stages associated with metastasis, their potential relationship is not well elucidated. Again, there is a need for greater analysis of cachexia in the existing preclinical mouse models of breast cancer metastasis, given the scarcity of animal models for cancer cachexia investigated in the current literature. Mouse models with micro-CT analysis provides for a robust measurement tool for determining the adipose tissue and muscle mass in longitudinal studies without invasive experiments in patients.18,19 In combination with other imaging modalities such as positron emission tomography and other functional imaging, metastatic lesions can be quantified with high spatial resolution.20 These measurements and imaging studies could provide us with important insights into the kinetics of cachexia in the context of systemic metastasis and treatment.

In our case study, at 15 months after diagnosis, though our patient’s overall body weight remained above baseline and stable, metastasis continued to progress (Fig. 2), with a continued decrease in PM loss (Fig. 3). This was followed by a sharp decline in weight and finally recurrent disease modeled by increased tumor burden with a decrease in the total area of SF, VF, AM, and PM, eventually followed by death (Fig. 3). These data are in line with the findings of Baracos et al.21 in 441 non-small-cell lung cancer patients that showed muscle loss with or without fat loss to be prevalent across all body mass index categories, and therefore having the potential to affect weight variably, while persisting as a common factor across all patients with progressive advanced stages of cancer.

In our case study, the increasing tumor burden at L3, associated with advanced cancer stage, was correlated with the area of other tissues at L3. This was done in order to highlight differences in muscle and fat loss in a cachectic patient, as well as evaluate for which muscle type may decrease as tumor burden increases. Interestingly, the correlation between PM and TU at L3 is moderately negatively correlated when the change in PM at a timepoint t − 1 is compared to TU at a timepoint t, meaning any change in TU tended to correlate moderately with the change in PM that occurred at the previous time-point (Tables 2C and F and 3C and F). Compared to SF, VF, and AM, also negatively correlated with TU across different timelines, PM was noted to be more continuously decreasing, while other tissue types seemed to fluctuate in their cross-sectional areas. Given that these are assumptions gleaned from correlative data from a single patient, causal relationships cannot be concluded, and extrapolations to all breast cancer patients are unfounded. Furthermore, we cannot rule out that other factors might have led to comorbidities, such as chemotherapy causing anorexia that led to weight loss. However, the relative time course of each of the five tissue areas in our case patient, at the L3 cross-section, is indeed illustrative of interrelationships that could be investigated in future controlled studies with multiple patients.

Imaging quantifications suggest that the strongest negative Pearson’s correlation among our patient’s five tissue types was between the area of PM at a preceding timepoint and the area of TU, correlated with r = −0.83 (Table 2C), while the strongest negative Spearman’s correlation was between the incremental changes in the area at a specific timepoint of AM and TU, correlated with ρ = −0.71 (Table 3D). SF and TU were strongly negatively correlated with SF at a lagging timepoint, and VF and TU were strongly negatively correlated with VF at a preceding timepoint. These findings indicate that the mechanisms behind VF loss and PM loss may proceed more rapidly than those that govern the increase in TU. The SF loss, on the other hand, may likewise occur due to a slower mechanism than that of the mechanism behind increasing TU. Finally, AM loss and increasing TU burden may arise due to similar factors or correlate randomly due to other related factors. 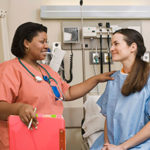