Although it sounds a little strange performing acupressure on yourself – self-acupressure — is actually an effective modality for cancer patients coping with fatigue, pain, depression, and other symptoms of their disease, according to Suzanna Maria Zick, ND, MPH, and her team. Dr Zick is research associate professor of family medicine and nutritional sciences and co-director of integrative family medicine at the University of Michigan. She and her colleagues had been looking for a self-care technique for their patients with breast cancer when they decided to try acupressure. A component of traditional Chinese medicine, acupressure utilizes pressure applied with the thumb, finger, or even a device, to points located throughout the body.1

The investigators had considered using acupuncture, which is known to yield encouraging results, but encountered barriers: a high dose is often necessary for patients 65 years old and older. In acupuncture, dosing translates to frequency of treatments, and older people tend to have the most difficulty coming to the office more than once or twice a week so more frequent visits are more difficult. Also, acupuncture is not covered by insurance in Michigan. The state does not have any licensed acupuncturists, and in fact, it does not have many acupuncture practitioners at all.

After considering the barriers to acupuncture treatment, Dr Zick and her group decided that the ideal option would be to teach their patients to perform acupressure on themselves. Acupressure is a modality patients can perform wherever they are, and they can increase the dose to as often as every day, if need be. The treatment costs nothing; it just takes a little time. “Teaching self-care techniques can be quite powerful,” Dr Zick told Oncology Nurse Advisor.

The investigators introduced the technique to the women by explaining that it was a component of Chinese medicine. Acupressure uses the same acupoints as acupuncture, and stimulating the points can bring about an improvement in illness and symptoms. This is one treatment women could do entirely by themselves. The women were intrigued at the concepts of self-care and acupressure.

Patients ranged in age from 30 to 89. Staff members, referred to as acupressure educators, spent a maximum of 15 minutes showing the women where the 9 acupoints were on their bodies. The women learned to stimulate each point in a circular motion for a full 3 minutes without stopping; they could, however, take breaks in between each points. Starting at the points on the head, they performed the technique at each point down to the toes from right to left. The educators taught the women how much pressure to apply and the motion to use. Each woman received a handout that illustrated where the points were, reminded them how long to press on each point, and reinforced all the things they had heard in the session.

Some patients had arthritis in their hand and others had various types of resting tremors; these conditions did not affect their acupressure. It was not affected by disease stage at initial diagnosis or menopausal status. In addition, the effect was the same regardless of treatment — chemotherapy, hormones, or radiation therapy. Location and time of day were highly variable. Some patients performed acupressure at work, others did it at home when they first woke up or just before they went to bed, and some performed it during their lunch break at work. 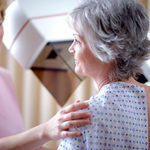 Recall Down, Cancer Detection Up With Digital Breast Tomosynthesis