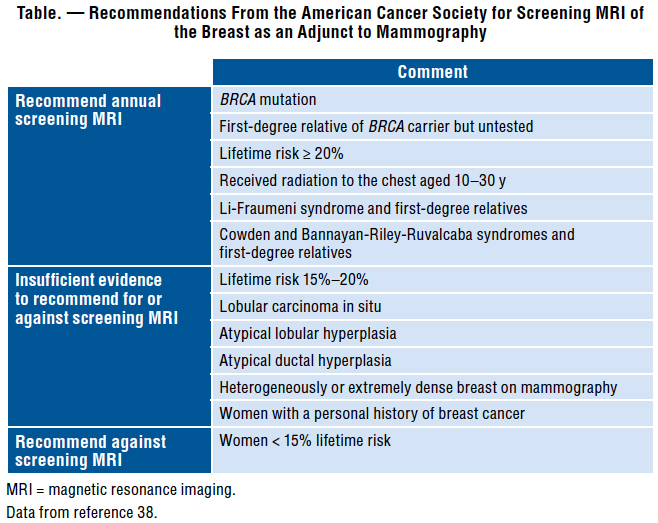 The evidence supporting MRI screening of the breast continues to evolve. Many studies have shown benefit in high-risk populations (> 20% lifetime risk).28,40-45 In 2008, Warner et al46 performed a meta-analysis of 11 prospective studies that compared the sensitivity rates of annual screening mammography performed in conjunction with MRI and annual screening mammography alone. Their meta-analysis found an increase in sensitivity rate of 94% when mammography was combined with MRI as compared with a rate of 32% for mammography alone.46 These findings are similar to other studies, including a multicenter trial by Sardanelli et al,44 in which MRI was determined to be more sensitive (91%) than clinical breast examination (18%), mammography (50%), ultrasonography (52%), or mammography plus ultrasonography (63%). In addition, 31% of cancers were detected by MRI alone.44 In 2015, Riedl et al45 screened a high-risk patient population with mammography, sonography, and MRI, and they found that a higher percentage of cancer was detected by MRI alone (45%) vs mammography alone (5%) and ultrasonography alone (0%). The authors also found an added cancer detection rate of 1.3% with MRI alone, which translates to 13 additional cancers detected per 1,000 screening MRI examinations performed.45 A 2015 report by Raikhlin et al47 documented detecting an additional 10 cancers per 1,000 patients screened with MRI and mammography together vs mammography alone.

In addition to studies of high-risk populations, the data from other studies support use of screening MRI of the breast in populations for which ACS guidelines in 2007 suggested insufficient data were presented, including patients with high-risk lesions and those with a personal history of breast cancer.48,49 For example, in a retrospective study of 1,699 patients with a personal history of breast cancer and no other risk factors, Brennan et al50 observed a cancer-detection rate of 12%, of which 59% were detected by MRI alone. MRI screening in this study yielded a positive predictive value of 39%, and the authors concluded that a definite benefit to its use exists in this population.50

Benefits of MRI screening should be weighed against risks and limitations such as cost. Saadatmand et al51 performed a large, prospective study evaluating use of MRI screening in patients with familial risk factors and an estimated lifetime risk of breast cancer that was higher than 15%. The benefit of including annual screening MRI resulted in an estimated mortality rate reduction of 25% vs 17% in those who did not undergo MRI; however, Saadatmand et al51 found that adding MRI to the annual screening regimen was 2.5 times more expensive per life-year gained.

By addressing the costs and time limitations of acquisition, active research in abbreviated protocol screening MRI of the breast shows promising results. In 2014, Kuhl et al52 conducted a prospective, observational reader study on an abbreviated protocol screening MRI of the breast based on a maximum intensity projection analysis of early, postcontrast, T1-weighted imaging. Compared with the full protocol, which had an acquisition time of 17 minutes, the abbreviated protocol took 3 minutes to perform and, on average, 28 seconds to interpret; in addition, the abbreviated protocol had equivalent diagnostic accuracy.52 Since then, additional studies have lent further evidence supporting the abbreviated screening protocols, suggesting that they may replace full protocols in the future without sacrificing diagnostic accuracy.53-55 Another important limitation of MRI is its rate of specificity. The increased sensitivity rate associated with MRI comes at a cost in terms of reduced specificity, thus resulting in increased callback rates and benign findings on biopsies. When MRI was added to mammography, Warner et al46 and Sardanelli et al44 found that the specificity rates decreased from 99% to 95% and 96%, respectively. Raikhlin et al47 reported a specificity rate of 86% for MRI of the breast with associated callback rates nearly 10 times higher and biopsy rates nearly 5 times higher than with mammography alone. Schwartz et al56 concluded that the positive predictive value of 20% and the increased callback rate of 24% may not justify MRI screening in the population they studied for the added cancer detection rate of 2%.

Contraindications to MRI of the breast are general related to gadolinium contrast, including those

with gadolinium allergy, compromised renal function, and those who are pregnant. Other contraindications include the presence of a pacemaker/defibrillator, presence of some types of metallic foreign bodies, and claustrophobia.

Screening MRI of the breast is the most sensitive imaging modality for detecting breast cancer, but the limitations of MRI prevent its use as a population-based screening tool. The results from studies show that the benefits of MRI typically outweigh the limitations among patients with an estimated lifetime risk of breast cancer of higher than 20%.28,40-47 As new data become available, additional indications may emerge. In the meantime, no clear indication exists for performing screening MRI in patients with dense breasts, and the recommended use of screening MRI in this population should be the same as that for the general population based on personal risk. 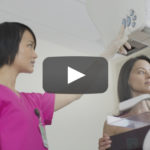