Recent guidelines state that all patients with invasive breast cancer should have their human epidermal growth factor receptor 2 (HER2) status determined.1 The guidelines support the use of immunohistochemistry (IHC) or fluorescent in situ hybridization (FISH), but not genomic testing through mRNA or DNA microarrays. The guidelines were jointly issued by the American Society for Clinical Oncology (ASCO) and the College of American Pathologists (CAP), and they are an update of guidelines issued in 2007.2

The recent guidelines define a tumor as HER2-positive (HER2+) when IHC determines protein overexpression or when FISH determines gene amplification. In cases where the results are equivocal, an alternative assay (IHC or FISH) should be performed. Furthermore, the test should be repeated if its results seem discordant with other histopathologic findings. These tests are recommended in the new guidelines because they are evidence-based.

Oncology Nurse Advisor (ONA) spoke with Massimo Cristofanilli, MD, about his concerns about genomic testing being left out of the new guidelines. Cristofanilli is director of the Breast Care Center at the Kimmel Cancer Center and Thomas Jefferson University and Hospitals in Philadelphia, Pennsylvania. He considers the new guidelines a missed opportunity to incorporate genomic testing as part of the standard of care, and he argues that tumor heterogeneity will never be completely captured by single-gene testing. His research demonstrates that more accurate subtyping results in better treatment.

Cristofanilli recently presented research on the use of tumor subtyping through the combined use of genomic testing with MammaPrint and BluePrint (both from Agendia; Irvine, California) to identify disease subgroups.3 The retrospective study of 374 patients had a median follow-up of 9.7 years, and it used the genomic tests to determine molecular subtypes of the patients’ tumors. The molecular subtypes for breast cancer are luminal A, luminal B, HER2, and basal. The patients had been classified by IHC/FISH into three categories: hormone receptor-positive/HER2–, HER2+, or triple-negative. The study examined how subtypes and prognostic stratification varied with genomic testing versus IHC/FISH. 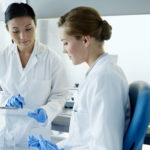