The I-SPY 2 TRIAL (Investigator of Serial Studies to Predict Your Therapeutic Response through Imaging and Molecular Analysis 2) is a Phase II “platform” trial with a backbone of standard therapy to which multiple experimental compounds can be added and compared with a common control regimen.66 Patients with stage II–III breast cancer were included in the study with the only exception of women with hormone receptor-positive and low-risk tumors as assessed by the 70-gene assay. For the purpose of randomization, eligible patients were categorized into eight different subtypes according to HER2 status, hormone receptor status, and genomic risk score. All patients received a neoadjuvant treatment with 12 cycles of weekly paclitaxel in the control group or in combination with one of the several experimental agents. Before surgery, all patients in all treatment arms received four cycles of doxorubicin and cyclophosphamide. The assignment to the experimental group was performed through an adaptive randomization procedure. With this approach, new patients entering the trial are more likely to be randomized to receive the compound that showed to be active for their specific tumor subtype. At the same time, this type of trial design allows a more rapid selection of promising regimens to be then developed in Phase III trials.66

More recently, neratinib was also evaluated in the neoadjuvant NSABP FB 7 Phase II trial (NCT01008150).68 This study had a backbone of weekly paclitaxel followed by doxorubicin and cylophosphamide. It included three arms consisting of trastuzumab, neratinib, or both added to paclitaxel. Preliminary results of this study have been reported at the San Antonio Annual Meeting in 2015. Overall, pCR rate was higher for the combination of trastuzumab and neratinib (50.0%) in comparison to trastuzumab alone (38.1%) and neratinib alone (33.3%). The latter two results conflict with the I-SPY 2 trial in which neratinib was expected to be superior to trastuzumab. Final results from this study are awaited, including a longer follow-up to investigate possible survival difference among treatments.

We conducted an electronic research of the registered trials until March 2017 using www.clinicaltrials.gov to identify the ongoing trials evaluating the role of neratinib in breast cancer. Our research yielded 23 registered trials, of which five trials included patients with early-stage breast cancer (Table 1).

More than 10 years have passed since the addition of 1 year trastuzumab to chemotherapy in the treatment of patients with HER2-positive early-stage breast cancer.2–4 Several efforts in trying to de-escalate or to escalate this approach have been investigated over the past years.13,69 For a specific subgroup of patients with node-negative and small tumors, de-escalating chemotherapy burden with the use of anthracycline-free regimen (weekly paclitaxel for 12 cycles) proved to be effective and can now be considered an option.70 In contrast, as further highlighted by long-term outcome results from the pivotal trastuzumab trials,29,32 ~25%–30% of women with HER2-positive early-stage breast cancer still relapse at 10 years. Further research efforts for trying to improve these outcomes should be considered as a research priority. Neratinib has shown promising results in this setting demonstrating to be an active molecule in both the adjuvant and neoadjuvant settings (Table 2). However, long-term follow-up data from the available trials as well as further studies are needed to better clarify its role in patients with HER2-positive early-stage breast cancer treated with trastuzumab-based therapy. 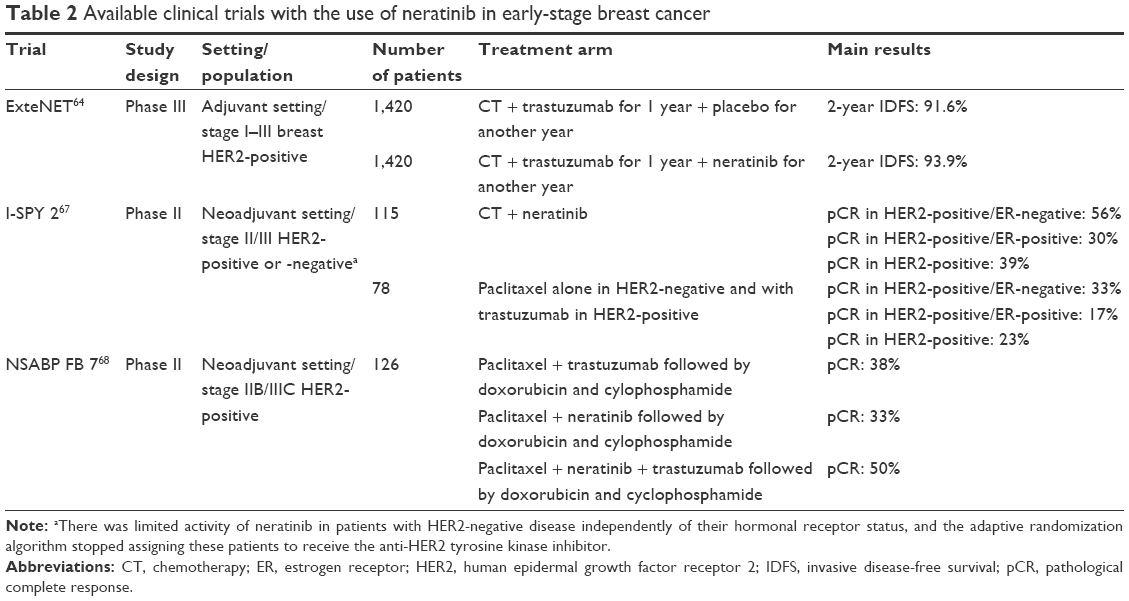 With the availability in the near future of another possible escalating strategy with the dual anti-HER2 blockade trastuzumab plus pertuzumab, the clinical management of patients with HER2-positive early-stage breast cancer may become even more challenging. In this scenario, translational research efforts should be prioritized in order to better identify which patients are not cured with chemotherapy plus trastuzumab. Predictive biomarkers beyond HER2 are also needed to better guide the preferred treatment option in these cases. So far, the main efforts in this field have focused on the potential role of HER2 receptor, PI3K, c-MYC expression, and the host immune system.

Several studies investigated the prognostic and/or predictive values of the HER2 gene polymorphisms,71 specific domains and alterations in the HER2 receptor,21,72–74 and soluble HER2 levels.75,76 However, no definitive conclusions can be drawn on this regard, especially for their predictive role in the adjuvant setting.

Alterations that lead to constitutive activation of the PI3K pathway, including PI3K catalytic subunit alpha (PIK3CA) mutation and low PTEN expression, seem to be mediators of trastuzumab resistance.77 Several studies in both the metastatic78–80 and neoadjuvant81–83 settings appear to be in the same line of the findings from preclinical experiments. However, the available data in the adjuvant setting did not show any predictive role for PIK3CA or PTEN.84–87

The MYC oncoprotein acts as a downstream target of the proliferative signals driven by HER2 and has a potential role as predictor of response to anti-HER2-targeted therapies.88 Although preliminary evidence suggested that MYC gene copy number abnormalities could be associated with additional benefit to trastuzumab even in the adjuvant setting,89 subsequent research did not confirm the potential predictive role of MYC protein expression.90