To detect rearrangements, read pairs with unexpected separation distances or orientations that discordantly map to two distinct genes are identified. In order to determine the exact position of the breakpoint, reads that partially map to both genes are then reviewed. Carrara et al50 have comprehensively reviewed the RNA-seq fusion detection tools, and Lin et al51 have detailed the WGS statistical algorithms that detect such variations (structural variation callers). High-throughput sequencing technologies suffer from greater error and shorter reads than traditional sequencing methods, and the bioinformatic pipelines often result in a long list of fusion candidates that require extensive experimental validation.52 Advanced computational analyses are, therefore, required to decipher true rearrangements from false positives that are due to reverse transcriptase template switching, incorrect mapping, read-through transcripts from the splicing of two adjacent genes, and other systematic errors. Further analysis can also help in determining the pathogenic significance of these candidates.53,54 These methodologies have led to the discovery of important fusion events in hematologic and solid tumors.55–57

Whole-exome sequencing can identify rearrangement events whose fusion junctions also occur in the coding region.56,58 More recently, deep sequencing platforms have been developed that capture introns and can detect fusions with intronic breakpoints, previously undetected by exome sequencing only.59 Further, rearrangements occurring in other noncoding regions of the genome can place a gene (or part of it) under the regulation of a different gene promoter, eg, IGH-CCND1 in mantle cell lymphoma.60 Such events are not detectable by transcriptome or hybrid capture RNA-seq (Table 2).

Despite the increased sensitivity in detecting rare events, massively parallel sequencing is prone to error at many levels such as library preparation, analysis, and referencing due to the vastness of the genome and similarity between genes (Table 2).61,62 Due to the reduced quality of formalin-fixed, paraffin-embedded samples, tumor tissue contamination, and low frequency representation of chimeric transcripts, the reduced number and depth of reads can lead to false-negative results in RNA-seq. Newer methodologies are being developed to combine RNA-seq and WGS data to improve sensitivity and specificity.63 For a more specific and reliable detection of fusions, SPET and AMP are currently being explored.64,65

Clinical Significance of Fusions in Cancer

A recent study using RNA-seq, DNA copy number analysis, and gene mutation analysis of ~4000 primary tumors showed that tumors harboring transcript fusions had significantly fewer driver mutations, suggesting a tumorigenic role for gene fusions.34 Tumors with recurrent, in-frame fusion transcripts were found to have reduced number of gene mutations in comparison to those without recurrent in-frame fusions. This was a common finding in many cancers types, including breast cancer, suggesting that fusions can drive cancer growth and progression in epithelial tumors.

It is important to note that rearrangements not only create novel driver oncogenes but can also disable critical tumor suppressors. In a recently published study, it was shown that ~16% of the osteosarcomas, which lacked commonly known hotspot TP53 mutations, were instead reported to have recurrent rearrangements in intron 1 of TP53.69 Some of these rearrangements resulted in fusions that led to the loss of p53 tumor suppressor function. There are many other reports of out-of-frame fusions with functional consequences.70–72 Such fusions involving tumor suppressor genes, transcriptional repressors, phosphatases, or other regulatory processes can also have a role not only in tumorigenesis but also in drug resistance and malignant phenotype.

Recurrent gene fusions represent a unique class of rearrangements that can serve as predictive or prognostic biomarkers or both. The most commonly observed gene classes involved in fusions are kinases and transcription factors, together representing >50% of all genes found in fusions.73 Recurrent fusions that result in the activation of tyrosine kinases such as BCR-ABL in CML and RET fusions in thyroid cancers have been studied extensively as these cancers are sensitive to kinase inhibitors. This has led to FDA-approved RTK inhibitor (RTKi) therapies for these tumors types, with the fusions serving as predictive biomarkers. Since kinase activation drives cancer-relevant pathways such as growth and proliferation, it is not surprising that oncogenic fusions often retain an intact kinase catalytic domain. Further, many of these kinases are often fused with one of a variety of partners, each with the potential for a unique mechanism of activation such as constitutive dimerization or ligand-independent autophosphorylation, depending on the domains involved in the fusion.74 Table 3 lists a few examples of recurrent kinase fusions that have been reported with more than one fusion partner. 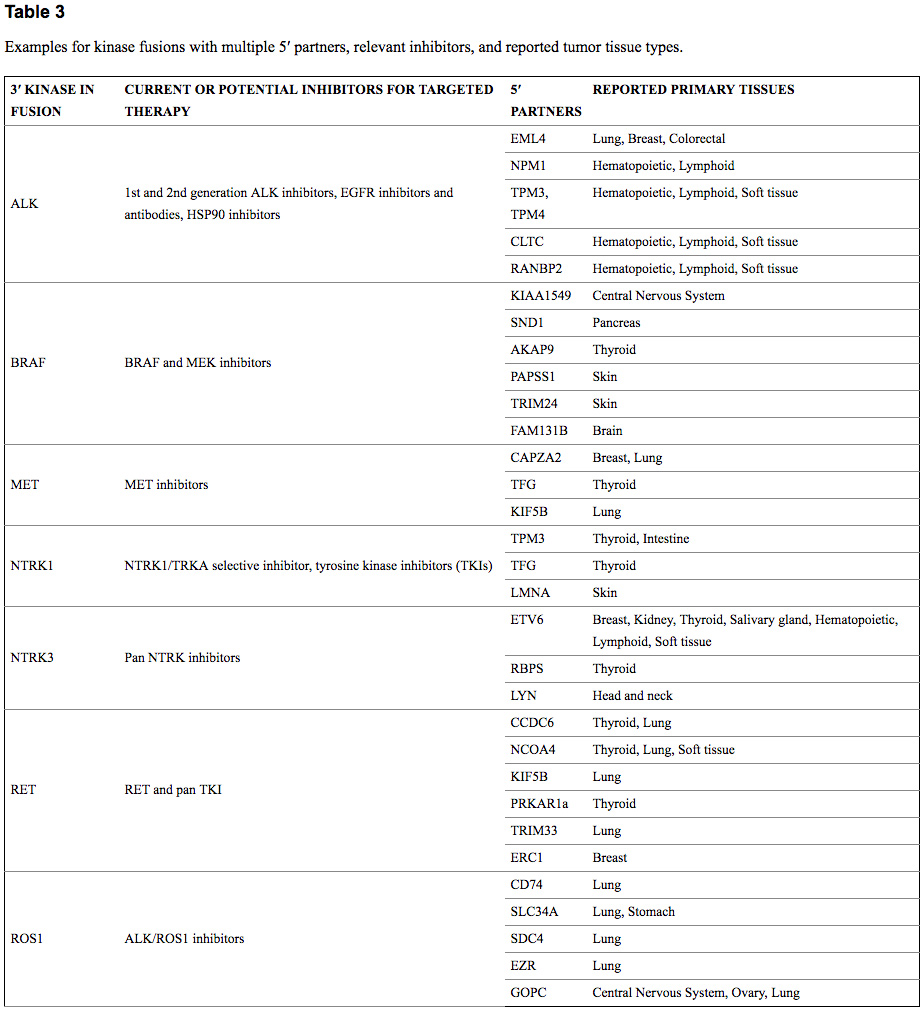