Patients with breast cancer undergoing radiotherapy do not experience increased surface concentrations of aluminum in the axilla regardless of deodorant or antiperspirant use, according to a study published in Radiotherapy and Oncology.

Use of antiperspirants and deodorants has been shown to improve the quality of life in patients. Despite prior studies not finding any significantly increased risk of dermal toxic effects associated with deodorant use, however, physicians typically recommended against its use for patients undergoing breast radiotherapy.

Researchers assessed data acquired from an online, anonymous survey to which both patients and practitioners responded regarding skin care and radiation therapy. Optically stimulated luminescent dosimeters (OSLDs) were also used to measure the surface dose of aluminum zirconium tetrachlorohydrex glycine, an ingredient used in standard and extra-strength antiperspirants and deodorants, on a tissue equivalent for multiple sequential gantry angles.

Analysis of the OSLD measurements showed no significant differences in surface dose regardless of deodorant application, gantry angles measured, and aluminum concentration of antiperspirant applied.

The authors of the study concluded “that the use of currently available antiperspirants during breast radiation can be liberalized to improve patient quality-of-life without risking increased axillary dermatitis.” 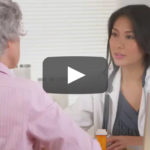