What is breast reconstruction?

Many women who have a mastectomy—surgery to remove an entire breast to treat or prevent breast cancer—have the option of having the shape of the removed breast rebuilt.

In a final stage of breast reconstruction, a nipple and areola may be re-created on the reconstructed breast, if these were not preserved during the mastectomy.

Sometimes breast reconstruction surgery includes surgery on the other, or contralateral, breast so that the two breasts will match in size and shape.

How do surgeons use implants to reconstruct a woman’s breast?

Implants are inserted underneath the skin or chest muscle following the mastectomy. (Most mastectomies are performed using a technique called skin-sparing mastectomy, in which much of the breast skin is saved for use in reconstructing the breast.)

Implants are usually placed as part of a two-stage procedure.

In some cases, the implant can be placed in the breast during the same surgery as the mastectomy—that is, a tissue expander is not used to prepare for the implant (3). 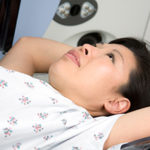