A cyclophosphamide-free chemotherapy regimen may be linked to a higher likelihood of menses resumption with minimal impact on disease-free survival (DFS) and overall survival (OS) in young women with early-stage breast cancer, according to findings published in the Journal of the National Cancer Institute.

The authors noted that although adjuvant chemotherapy with cyclophosphamide in combination with anthracycline and/or taxanes has proven to be an effective treatment for breast cancer, cyclophosphamide-containing chemotherapy may induce premature menopause leading to infertility in women.

In a randomized phase 3 trial (ClinicalTrials.gov Identifier: NCT01026116), the researchers sought to determine if the elimination of cyclophosphamide from a chemotherapy regimen would result in higher menstrual resumption rates, specifically in young women with estrogen receptor (ER)-positive breast cancer.

Post hoc exploratory analysis of pregnancy outcomes assessed by patient-reported questionnaires revealed a higher rate of successful pregnancy among women in the EP-wP arm (9.6%) compared with those in the EC-wP arm (2.6%; P =.03).

Grade 3 to 4 leukopenia and neutropenia were the most common adverse events (AEs) observed in both treatment arms. Treatment-related grade 3 to 4 AEs were consistent with the known safety profiles of relevant drugs and were generally well-tolerated and resolved. There were no fatalities reported in the study.

“…[O]ur findings can be extrapolated to patients with other subtypes of breast cancer,

such as [triple-negative] or HER2 enriched, because the effect of paclitaxel and cyclophosphamide on menstrual resumption is not cancer subtype specific,” the authors reported. 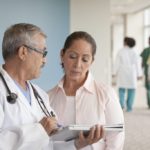