In the setting of breast cancer, breast-conserving surgery was a predictor for radiotherapy-associated thoracic soft tissue sarcomas, according to results of a study published in The Lancet Oncology.

Soft tissue sarcomas are a rare side-effect of radiotherapy, but prevalence in the US is increasing. Despite this trend, few studies have focused on identifying risk factors. Therefore, researchers sought to evaluate potential predictors of sarcoma risk.

Of 430 patients in the SEER cohort with sarcomas, 268 were angiosarcoma and 162 were other sarcomas. Risk for angiosarcoma was associated with the same risk factors as sarcomas overall (all P ≤.017) plus radiotherapy with breast-conserving surgery compared with mastectomy (P =.012) and initial chemotherapy (P =.047). Risk for other sarcomas was associated with stage II breast cancer (P =.0026), Black compared with White race (P =.015), and initial radiotherapy (P =.015).

These study findings showed risk for thoracic soft tissue sarcoma was higher for those who underwent breast-conserving surgery, received radiotherapy, anthracyclines, and had a history of hypertension and/or diabetes prior to breast cancer diagnosis. 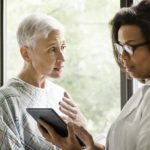 Some Women With Early-Stage Breast Cancer May Safely Forgo Surgery