Male breast cancer accounts for an estimated 1% of breast cancer cases in the United States.1 Due to its relative rarity, few studies have evaluated treatment patterns and prognostic factors in the disease.2

To better understand how clinicians treat breast cancer in men and which factors might lead to better patient outcomes, a team of researchers at Mayo Clinic in Rochester, Minnesota, examined information from the National Cancer Database on 10,873 men diagnosed with stages I through III breast cancer between 2004 and 2014. Approximately half of the patients were diagnosed between the ages of 50 and 69 years, with a median age at diagnosis of 64 years.3

The investigators found that 24% of patients underwent breast-conserving surgery, and of those patients, 70% received radiotherapy. Less than half (44%) of patients received chemotherapy, while most (62%) patients with estrogen receptor-positive disease received endocrine therapy.

The researchers observed a significant increase in rates of total mastectomy and contralateral prophylactic mastectomy during the study period. They also identified an increase in the rate of genomic testing on tumors, as well as the use of antiestrogen therapy.

Prognosis was poorer for older patients, black men, individuals with ongoing health issues unrelated to breast cancer, and patients with higher stage and tumor grades. Conversely, residing in high-income areas, having tumors that express the progesterone receptor, and receiving chemotherapy, radiation, and antiestrogen therapy were associated with better overall survival.

“Despite the lack of prospective randomized trials in patients with [male breast cancer], the results of the current study demonstrated that the treatment of this disease has evolved over the years,” the authors concluded. “These findings further the understanding of the modern treatment and prognosis of [male breast cancer], and identify several areas for further research.” 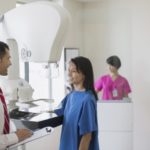