However, the potential therapeutic benefits of DOX are limited by the risk of cardiotoxicity, which has been evidently related to its lifetime cumulative dose.7–9 To overcome this hurdle, the liposomal DOX (L-DOX) formulation was developed in order to reduce DOX-associated cardiotoxicity while preserving its antitumor efficacy.10 The L-DOX formulation encapsulates DOX within a phospholipid bilayer that is coated with methoxypolyethylene glycol (Figure 2). The PEGylation protects the liposomes from recognition by the mononuclear phagocyte system (MPS) and allows a longer circulation time in the bloodstream while reducing the exposure of free DOX circulating in the plasma. Biodistribution studies have shown that L-DOX has the ability to deposit and/or penetrate tumors and release DOX.11Although the mechanism of release of DOX from its liposomes is still unknown, a 10-fold higher exposure of L-DOX than DOX is observed in metastatic BC tissue as compared to healthy breast tissue,12 which is explained by the enhanced permeability retention effect.13 This indicates that a therapeutic approach with L-DOX is more targeted compared to DOX. A differential pharmacokinetic (PK) characteristic between the two formulations includes a decreased clearance (CL), a smaller volume of distribution, and a longer half-life for L-DOX compared to DOX as a result of the sequestration of liposomes, due to their increased size, in the sinusoidal lumen of the liver, which limits their flow from the fenestrations of the lumen into the hepatocytes as compared to free DOX. This is also believed to contribute to reduced hepatic extraction of L-DOX compared to DOX as a single agent.14 The latter being primarily metabolized in the liver to the major cytotoxic metabolites: doxorubicinol and cytotoxic aglycones. The PK properties of L-DOX as compared to DOX are summarized in Table 1. The use of DOX as a stand-alone treatment has shown effectiveness in overall survival and response rate and time to disease progression.15 Its limitations are seen in its effect on healthy cells and the resulting adverse effects, with the most significant being cardiotoxicity. The comparison of safety profiles between DOX and L-DOX is summarized in Table 2 with the most common side effect for L-DOX being palmar–plantar erythrodysesthesia, a skin toxicity that can be managed with supportive care, unlike cardiotoxicity, which is significantly more prevalent for DOX.16 Although the mechanism of DOX-induced cardiotoxicity is not fully understood, its administration is dose limited. It was shown that the risk of DOX-induced cardiotoxicity increases with the increase in its cumulative lifetime dose to becoming irreversible (ie, cardiomyocytes death) when the latter reaches 450–550 mg/m2.17 The other major cardiotoxic effects of DOX are the occurrence of congestive heart failure (CHF) in >20% of the treated patients.8 Additional but less detrimental adverse reactions include nausea, vomiting, gastrointestinal problems, neurological symptoms, and cutaneous injuries at the site of injection.4

While L-DOX has proven to be advantageous over DOX as a single agent, it is only indicated in the treatment of metastatic BC in combination with docetaxel,18 although it is frequently utilized as adjuvant therapy in metastatic BC.19 The comparative anticancer efficacies of these two drugs in addition to their use in combination with other anticancer agents in BC continue to be investigated.20 Table 3 summarizes the main findings of trials assessing regimens containing L-DOX. These trials evaluated the efficacy of several combinations in varied patient populations including both locally advanced and metastatic BCs as well as the elderly and in patients with previously treated BCs. Overall, L-DOX was effective and well tolerated in the majority of trials, making it a feasible treatment option when combined with other chemotherapeutics. In the present work, we sought to investigate L-DOX’s efficacy on BC and its potential associated cardiac toxicity when combined with other chemotherapeutic or targeted therapy, with the goal of showcasing the beneficial effect of L-DOX over DOX on BC therapy and cardiac function. 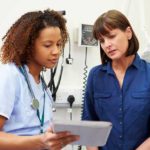