Due to the lack of high-quality comparative data, the most efficacious sequencing of chemotherapy agents in the treatment of mBC has yet to be defined. Despite several head-to-head chemotherapy trials within the metastatic setting, much of what is applied in clinical practice is extrapolated from chemotherapy trials in the adjuvant setting, with taxanes and anthracyclines incorporated early in the patient’s treatment course (granted, they had not received similar therapy in the adjuvant setting).

The class of chemotherapy agents commonly referred to as taxanes are among the most commonly used agents in mBC, especially when used as a single agent, and this class consists of drugs, such as docetaxel, paclitaxel, and nab-paclitaxel. Docetaxel can be administered either every three weeks or weekly on a three-week-on/one-week-off schedule (Table 1).17 In a randomized trial including only patients receiving adjuvant as opposed to palliative chemotherapy, weekly three-week-on/one-week-off schedule was associated with a significantly improved disease-free survival compared to the every three-week schedule.18 Though it is generally considered to be safe and well tolerated, docetaxel is associated with the risk of fluid retention that can be reduced by steroid premedication, more myelosuppression (most notably neutropenia), and gastrointestinal toxicities, such as stomatitis, nausea, vomiting, and diarrhea.19 Paclitaxel can also be administered either every three weeks or weekly on a three-week-on/one-week-off schedule.17,20 The former schedule is typically recommended based on its associated OS superiority seen in a recent meta-analysis.17 Since it is primarily renally excreted, patients with underlying mild-to-moderate liver dysfunction may be treated with paclitaxel. Paclitaxel when compared to docetaxel is associated with greater rates of associated treatment-related neuropathy and myalgia. Additionally, due to paclitaxel’s cremophor mixture preparation, patients are at risk for developing rare but serious allergic reactions, which prompts at least the initial use of steroid premedication. Direct comparison of docetaxel and paclitaxel in patients with mBC who previously progressed after an anthracycline-based chemotherapy regimen revealed that docetaxel produced a significantly better median time to progression (TTP; 5.7 vs 3.6 months) and OS (15.4 vs 12.7 months).21,22 However, patients receiving docetaxel had significantly higher rates of both hematologic and nonhematologic toxicities. 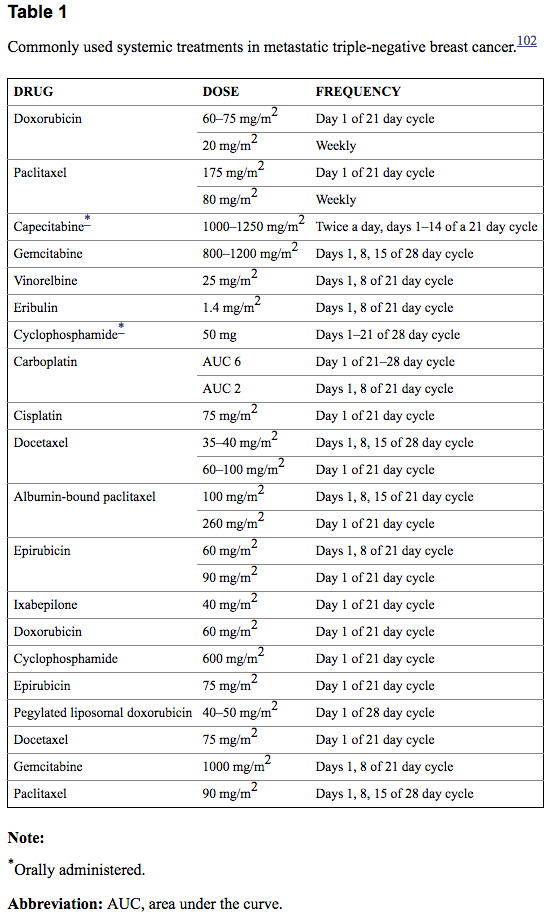 Similar to other taxanes, nab-paclitaxel has significant activity in mBC and is administered either weekly on a three-week-on/one-week-off schedule or every three weeks.23–25 Although more expensive, the side effect profile is similar to paclitaxel. However, nab-paclitaxel has a shorter infusion time and, due to its albumin-bound formulation, is associated with a lower risk of allergic reactions, which allows for the exclusion of steroid premedication and its associated risks of inducing hyperglycemia. In the Alliance trial,22 799 previously untreated patients with mBC were randomized to the three-week-on/one-week-off schedules of either paclitaxel or nab-paclitaxel and found no difference in PFS or OS but found a higher rate of grade 3 or higher treatment-related toxicity in the nab-paclitaxel arm, including sensory neuropathy (27% vs 18%) and hematologic toxicity (55% vs 22%).

Eribulin, through its inhibition of tubulin and micro-tubule polymerization, was shown to have activity in heavily pretreated patients with mBC and was approved by the FDA in USA for patients who progressed after receiving two different systemic chemotherapy agents. Administered on days 1 and 8 of a 21-day cycle, eribulin is often associated with less neuropathy than other microtubule-directed agents and can be administered with dose adjustment for mild-to-moderate liver and kidney dysfunction. The activity of eribulin was shown in a Phase III trial of 762 patients who were randomly assigned to treatment with eribulin or to another chemotherapy agent selected based on the physician’s and patient’s choice.26Although the treatment with eribulin significantly improved OS (13.1 vs 10.6 months) in a heavily pretreated population, all-grade neutropenia was observed in 45% of patients (5% of which was grade 3 or 4 in severity), and peripheral neuropathy was found to be the most common adverse event leading to drug discontinuation (5% of patients). A randomized trial comparing eribulin with capecitabine in patients with mBC (~25% of which were TNBC) who had received prior anthracycline and taxane therapy found no difference between the treatment arms with regard to overall response rate (ORR: 11% vs 11.5%) or PFS (four months in each). Patients in the eribulin treatment arm had an OS that approached clinical significance when compared to those receiving capecitabine (15.9 vs 14.5 months; P = 0.056).27 The treatment arms had different side effect profiles, with the most common adverse effects secondary to eribulin being neutropenia, alopecia, leukopenia, global peripheral neuropathy, and nausea and the most common adverse effects secondary to capecitabine being hand–foot syndrome, diarrhea, and nausea.

Vinorelbine, a semisynthetic vinca alkaloid administered on days 1 and 8 of a 21-day cycle, is another commonly used mBC chemotherapy agent, as it not only has single-agent activity in heavily pretreated patients (ORR: 25%–45%) but is also associated with side effects, including nausea, constipation, peripheral neuropathy, and hair loss.28–34 Ixabepilone is another FDA-approved drug in the treatment of mBC and acts as a nontaxane tubulin-polymerizing agent that has activity in taxane-resistant patients.35–37A clinical trial of patients with mBC (~25% of which were TNBC) who were previously exposed to anthracyclines and taxanes found that, although single-agent ixabepilone was associated with grades 3–4 peripheral sensory neuropathy in 14% of patients, it was also associated with an ORR of 19%, a PFS of 5.7 months, and an OS of 8.6 months.37 However, in a trial comparing ixabepilone with paclitaxel and nab-paclitaxel, ixabepilone was found to be associated with a shorter PFS (7.6 vs 10 months) and OS (21 vs 26 vs 27 months) but a lower incidence of hematologic toxicity (12% vs 21% vs 51%) and equal rates of grades 3–4 sensory neuropathy (25%).37 Despite a moderate adverse side effect profile compared to other taxanes or taxane-like agents, the utilization of ixabepilone is often limited secondary to the poor ECOG PS of the heavily pretreated mBC population. In fact, given its modest benefit and adverse effect profile, the agent was denied for approval in Europe.38 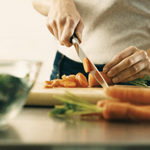