Early radiotherapy may preserve visual acuity in certain children with sporadic optic pathway/hypothalamic glioma, according to the results of a longitudinal cohort study published in Cancer.

The cohort included 38 children who were diagnosed with sporadic optic pathway/hypothalamic glioma from 2000 to 2018 at Texas Children’s Cancer Center in Houston, Texas.

Children were grouped based on whether they received early radiotherapy, which was defined as first-line therapy or first salvage therapy, and their visual acuity was assessed at baseline and at least every 12 weeks during treatment.

Blindness-free survival (BFS) was the primary endpoint, and blindness was defined as having 0.8 LogMAR (logarithm of the minimum angle of resolution) or worse, which is the standard cutoff used by most states to determine legal blindness.

The median follow-up was 8.5 years (range, 2-17 years), and the cohort was diagnosed with sporadic optic pathway/hypothalamic glioma at a median age of 3 years (interquartile range [IQR], <1-6 years).

A total of 27 children (71%) were allocated to the chemotherapy group, for which chemotherapy was the initial treatment and radiotherapy as a late salvage therapy was permitted. This group began chemotherapy at a median age of 3.5 years (range, <1-11 years).

The early radiotherapy group included 11 children (29%), who tended to be older. These children were diagnosed at a median age of 6 years (range, 2-16 years), and received radiotherapy a median of 2.5 years after diagnosis (IQR, 0.3-9.5 years).

In addition, BFS did not differ by age (children younger than 5 years vs children 5 years or older; P =.67) and was not significantly different among patients in the chemotherapy group who received late salvage radiotherapy compared with those who did not (P =.93).

The study authors concluded that their findings suggest that early radiotherapy preserves functional vision in the “appropriately selected, older patient” and should be considered following “significant” decline in visual acuity. 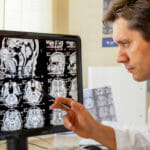 Extended Induction Chemotherapy Does Not Improve Survival in High-Risk Neuroblastoma