The researchers found that 17 percent of the patients were diagnosed with 46 malignant abnormalities; 28 percent were identified during screening. At first cancer diagnosis, the median age was 54 years. Multiple malignant abnormalities were reported in seven patients, with a median of three per patient. Prostatic adenocarcinoma was the most common malignant abnormality (8.6 and 3.8 percent of BRCA1 and BRCA2 carriers, respectively). Men with BRCA mutations had a significant increase in the overall incidence of malignant disease compared with the Jewish-Israeli male population (standardized incidence ratio, 8). Elevated incidence of prostate, melanoma, pancreas, and breast cancers, but not colon cancer, was seen in association with BRCA mutations.

“Our initial findings suggest that in addition to screening for prostate and breast cancer, as recommended in current guidelines, there may be a role for screening for pancreatic cancer and melanoma, whereas screening for colon cancer may not be justified,” the authors write. 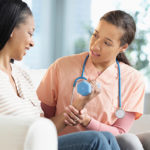 Support for Exercise Programs During, After Cancer Treatment