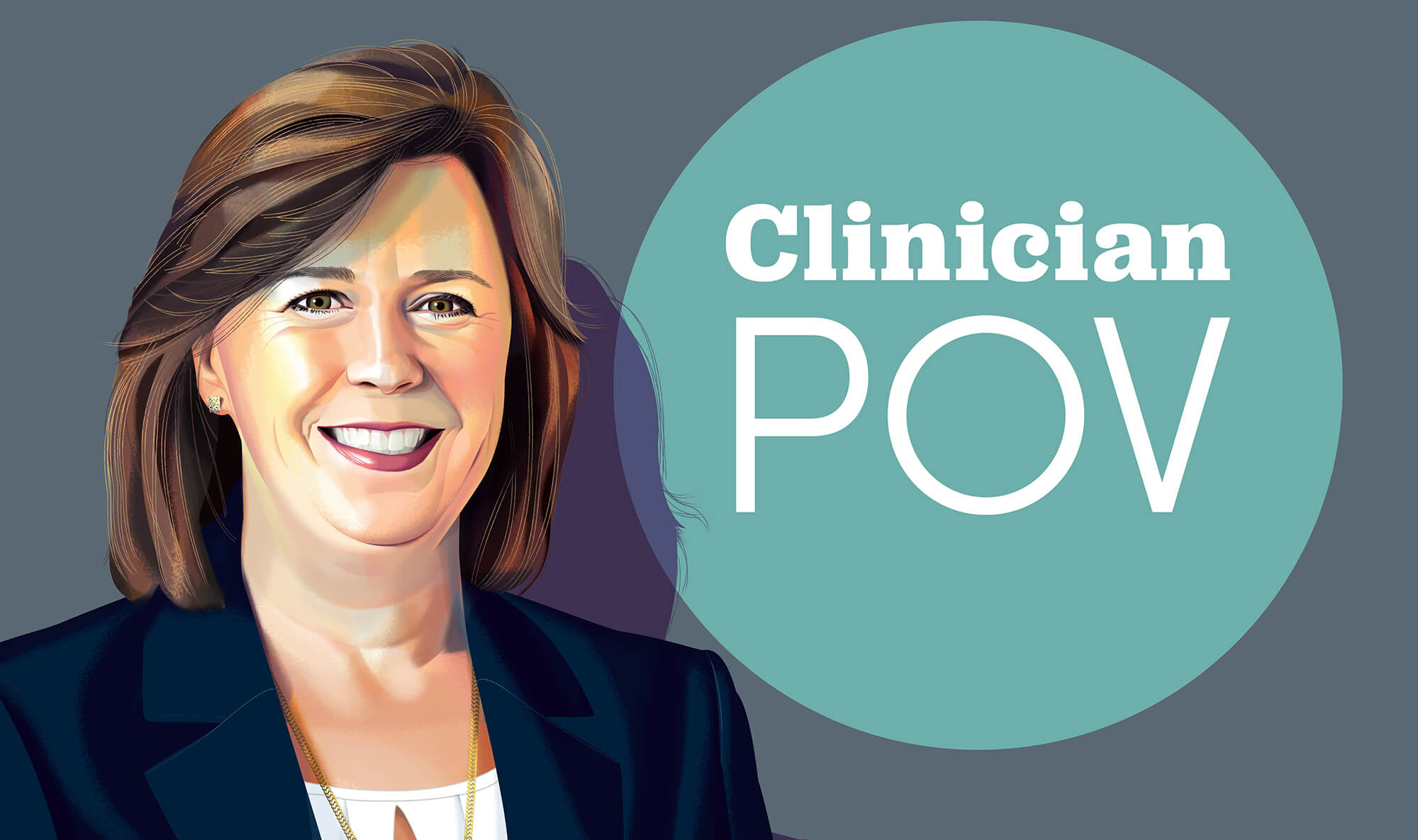 Kristi A. Acker, DNP, PhD, FNP-BC, AOCNP, ACHPN, is a clinical assistant professor at Capstone College of Nursing of the University of Alabama, Tuscaloosa. She is also a family nurse practitioner, an oncology advanced practice nurse, and a hospice and palliative care advanced practice nurse. Dr Acker maintains her clinical practice with Oncology Associates of West Alabama, and she provides outpatient oncology services at the Lewis and Faye Manderson Cancer Center in Tuscaloosa. She serves on the Alabama State Advisory Council on Palliative Care and Quality of Life and advocates for advancing palliative care for patients with serious illness at both the state and national levels.

The US Food and Drug Administration (FDA) has approved 4 drugs — the antiangiogenic agent bevacizumab and the PARP inhibitors niraparib, olaparib, and rucaparib — for 6 different ovarian cancer maintenance indications based on the results of clinical trials demonstrating their efficacy and tolerability. What factors help clinicians to determine which agent(s) may be the most effective for an individual patient? Are these drugs administered primarily as monotherapy or in combination?

When I started practicing in oncology nearly 30 years ago, treatment options for ovarian cancer were limited, and performance status essentially dictated what regimens were recommended. Now, given the availability of targeted therapies with improved tolerability profiles (ie, antiangiogenics and PARP inhibitors), the landscape is changing. As far as factors to consider are concerned, there is still one key consideration: treatment should align with the patient’s values and goals. Shared decision-making must be central, especially as providers consider a myriad of emerging options.

As the landscape changes, greater attention should be paid to uncovering the molecular processes underlying tumor histology. Early germline and somatic testing for BRCA1/BRCA2 and HRD, along with testing for other molecular mutations, is indicated. Results of the groundbreaking SOLO-1 study (ClinicalTrials.gov Identifier: NCT01844986) show that patients with genomic profiles bearing these mutations benefit significantly from treatment with PARP inhibitors, although these agents have shown less efficacy against BRCA wild type or homologous recombination proficient [HRP] tumors.2 Genomic assays to identify potential genomic aberrations should be performed at the time of diagnosis and have been widely studied in patients with stage III-IV disease.

Results of PRIMA (ClinicalTrials.gov Identifier: NCT02655016) found that niraparib yielded an increase in PFS in both the HRD and HRP populations, thus providing an option for first-line maintenance therapy regardless of biomarker status. 4 Niraparib and olaparib may both be administered as monotherapy in first-line maintenance following primary treatment for up to 36 months (niraparib) or 24 months (olaparib) or until disease progression.

To summarize, all patients with newly diagnosed epithelial high-grade serous carcinomas (HGSC), including fallopian tube cancer and peritoneal cancer, regardless of family history, should undergo germline testing for BRCA1/BRCA2 and other ovarian cancer susceptibility genes. Additionally, somatic tumor testing for BRCA1/BRCA2 variants, including HRD, should be performed upfront in patients with high-risk disease; such testing arms oncology providers with as much information as possible to make informed treatment plans alongside the patient, while bearing in mind the patient’s goals and values.

Unfortunately, patients with advanced ovarian cancer may continue to exhibit persistent disease or experience disease recurrence, thus making their disease incurable. With ovarian cancer, there is no tumor marker screening in place — so when a woman begins to exhibit symptoms, these are usually attributed to advanced disease at the time of diagnosis. However, recurrent disease is often responsive to therapy.  In certain subgroups of patients with germline BRCA1/BRCA2 or somatic HRD mutations, therapy with PARP inhibitors has significantly improved the PFS endpoints, revolutionizing treatment outcomes in advanced ovarian cancer. Further, modest PFS is achieved regardless of the biomarkers; therefore, PARP inhibitors should be an option for all patients interested in treatment.

There is promise for transitioning to a more chronic management approach, rather than a fatalistic one, to recurrent ovarian cancer, especially for those tumors with biological mutations. For patients facing recurrent disease, ensure that shared decision-making remains at the forefront of care; this includes informing patients about the availability of clinical trials. In patients with recurrent platinum-sensitive ovarian cancer, returning to platinum-based combination chemotherapy is optimal and has a favorable response rate.  Patients with HGSC have a remarkable rate of response with initial platinum-based treatment (approximately 80%).9 Oncology providers should closely monitor patients for hypersensitivity reactions and for higher-grade myelosuppression with repeated courses of platinum-based regimens. If combination chemotherapy is not an option, then single-agent chemotherapy regimens should be considered. In platinum-resistant recurrent disease, nonplatinum-based chemotherapy, either as monotherapy or combination therapy, should be considered.

Bevacizumab should be considered as single-agent therapy or in combination with chemotherapy, especially if marked ascites or symptom burden is a concern. In the setting of recurrent ovarian cancer, there are limited data supporting overall survival in patients treated with chemotherapy plus bevacizumab. Bevacizumab has a class effect risk for increased bleeding, blood clots, bowel complications, proteinuria, and hypertension, which may require pharmacologic management.

PARP inhibitors are postrecurrence maintenance options that can be considered in selected patients, especially those with BRCA1/BRCA2 mutations and platinum-sensitive disease. Agents with FDA approval for postrecurrence maintenance therapy include olaparib,5 niraparib,6 and rucaparib7 in patients with platinum-sensitive disease who have achieved a complete or partial response following platinum-based chemotherapy. PARP inhibitors are given orally, and common side effects include nausea, vomiting, anemia, thrombocytopenia, neutropenia, asthenia, fatigue, diarrhea, and/or constipation. Nonhematologic adverse effects can often decrease over time but must be closely monitored.  Renal and hepatic functioning should also be monitored.

In certain subgroups of patients with germline BRCA1/BRCA2 or somatic HRD mutations, therapy with PARP inhibitors has significantly improved the PFS endpoints, revolutionizing treatment outcomes in advanced ovarian cancer. Further, modest PFS is achieved regardless of the biomarkers; therefore, PARP inhibitors should be an option for all patients interested in treatment.

Most patients with ovarian cancer will experience disease recurrence.  What are the options at this point? Is this largely an unmet need?

As I mentioned earlier, recurrent ovarian cancer is considered incurable. Despite the observed marked response to treatment in platinum-sensitive disease, recurrence of disease is expected. In patients with platinum-sensitive tumors who experience relapse more than 6 months after treatment, further cytoreductive surgery may be indicated, followed by enrollment in a clinical trial and/or additional platinum-based therapy. PARP inhibitors are considered in relapsed disease for patients who are PARP-naive and have demonstrated increased disease activity compared with that seen with nonplatinum chemotherapy in platinum-sensitive disease. Many patients with relapsed disease will have received at least 2 prior lines of cytotoxic treatment, so persistent and worsening myelosuppression is a consideration. Risks for myeloproliferative disorders have been shown to be greater in patients with platinum-sensitive recurrent disease who have completed 2 regimens of platinum-based cytotoxic therapy. In the setting of relapsed and/or persistent disease, best supportive care and aggressive palliative care may be preferable and should be based on open communication with the patient.

With that said, oncology providers are learning to reframe discussions around recurrence, particularly given the strides in benefit seen with postrecurrence maintenance therapy in certain subset populations. For patients who demonstrate platinum-sensitivity and have germline or somatic mutations, progression-free endpoints are impressive. With the advent of novel therapies, the importance of clinical trials is even more vital. The available treatment options may have burdensome adverse effects, and managing these requires close monitoring and effective communication. Risks for developing myelodysplastic syndromes must be fully communicated as well. With each recurrence comes the increased likelihood of worsening and more complicated adverse events. Discussing with the patient the financial implications of treatment along with benefits and risks is imperative.

What is the future direction of PARP inhibitor therapy, other emerging agents, and/or new drug classes under investigation in ovarian cancer?

The benefit of using a PARP inhibitor as monotherapy over combination therapy with bevacizumab has not yet been determined. Questions include whether there will be a beneficial impact regardless of biomarker status; the utility of PARP inhibitor options upstream; and the benefits of PARP inhibitors in other cancers that have BRCA mutations, such as breast, pancreatic, and prostate cancers. Additionally, oncology care providers need to have access to predictive models that can help streamline decision-making in clinical settings.

Immunotherapy for ovarian cancer has become an area of intensive ongoing research, with some agents now being evaluated in recurrent ovarian cancer. Are any of the data promising?

This Q&A was edited for clarity and length.

Posted by Haymarket’s Clinical Content Hub. The editorial staff of Oncology Nurse Advisor had no role in this content’s preparation.

Next clinicianpov in Clinician POV